This weekend I led an Audubon Hike up Sharatin Mountain and there was still so much snow up there that I went back on Sunday and went skate skiing.  Audubon hikes are free hikes led by local volunteer hikers under the auspices of the Kodiak Chapter of the Audubon Society.  It's a good way for newcomers to town to learn the trails, and I always try to lead at least one every summer as payback for when as a newcomer and someone showed me the trails. 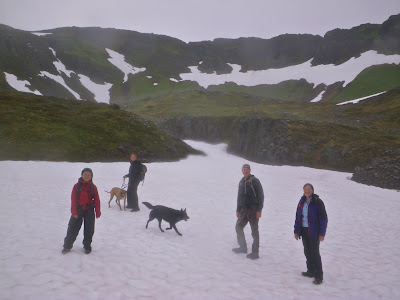 Saturday was a pretty dismal day and I was surprised that so many people showed up for the hike.  But at least it did stop raining and we made it up to the head of the big bowl on Sharatin.  It was too foggy to go up to the true summit. 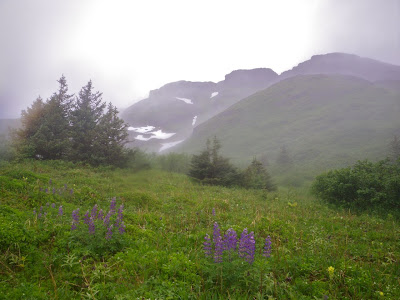 The skate skiing snow in the big bowl on Sharatin.  It was quite a big area and the snow was fast.  The way to the summit is by the two lines of snow in the middle of the picture at the far end of the bowl.

And here is a video of me skate skiing on the summer snow.  It may well be my last ski of the year.  Patrick

Posted by Zoya, Patrick, Nora and Stuart at 7:26 PM