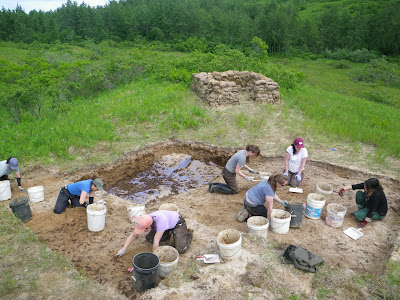 Community Archaeology 2012 has begun!  Every summer about this time I help run an archaeological excavation for the Alutiiq Museum that is open to all volunteers over the age of 14. On Monday we busted sods and re-opened an area we did not finish last year at the Amak site.  This is year 2 of excavation at the Amak site.  Our goals are to finish excavating the structure we found on the last day of excavation last year (the area covered by the blue tarp in the top photo), find and excavate the oldest layer at the site (L4 - 7100 years old!), and finally just to make sure that what we found last year is actually representative of what is at the site.

Last year we found a lot of hunting tools and not much in the way of features.  Our initial impression is that the site represents a place where Alutiiq hunters waited to ambush seals.  While they waited they sharpened and re-furbished their spears.  But my initial impressions have been wrong before and I believe in excavating at a site until there are no more surprises - until I feel I completely understand what is going on at the site.  And at the Amak site we still do not understand why the prehistoric Alutiiq  moved around so much dirt and sod or why they created a huge pile of rocks.  Also does the structure we found on the last day last year represent a house or a hunting shelter?

Anyway, the dig has begun.  In the top photo the crew cleans off the 1912 Katmai ash.  Every site that we excavate near the city of Kodiak is covered with this thick layer of volcanic ash - it fell almost exactly 100 years ago (June 1912).  In the photo below the crew begins to excavate into level 1.  This was the soil surface from about 4000 years ago until 1912.  We have found artifacts around 3500 to 4000 years old in this layer and also evidence for repeated tsunamis. 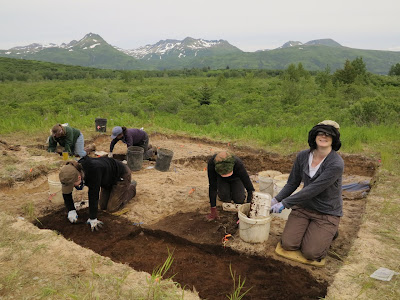 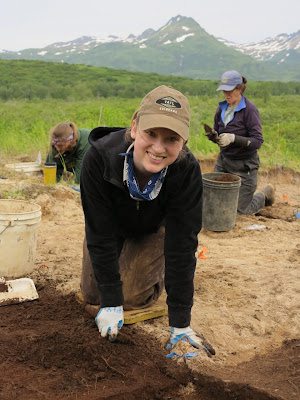 Andrea starts to excavate (above) while Ashleigh shows off the base of a ground hunting lance that she found.  The lance looks like those typically found in 5000 year old sites - so what is it doing in the top layer? 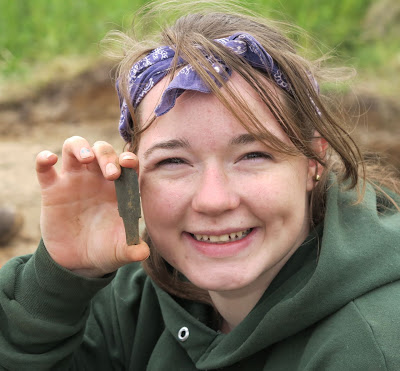 In the photo below co-Principal Investigator Molly Odell shows off an unfinished ground slate lance.  This lance was chipped to shape rather than ground and sawed.  This style of lance preparation is what we would expect of a 4000 year-old lance.  Also Molly has her own blog so if you want to read her on-going opinion about our excavation you can find it here. 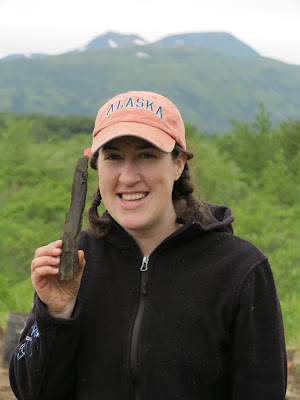 The best part about excavating at a site so close to town is that my kids get to visit while we are at work.  Here Stuey is checking out what I have been finding in the screen.  Patrick 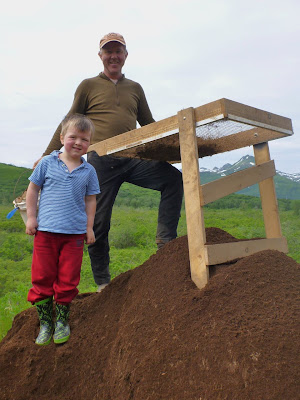 Posted by Zoya, Patrick, Nora and Stuart at 7:26 AM