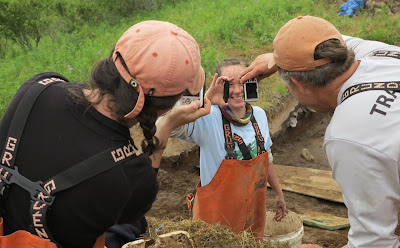 The Community Archaeology dig at the Amak Site is now half over, and things are starting to get a bit clearer.  Like last year we still finding mostly bayonets - so our story about the location as a hunting camp is holding up.  We still do not understand why the people using the site moved so much dirt around, but at least we now know how all the dumps and quarries are related to each other.

We have also found 2 large areas of scattered large rocks and charcoal stained soil.  I am beginning to think they may have lit large fires and filled them with large cobbles to retain heat longer than it would using wood alone.  Perhaps for processing and drying meat?   These piles also have some old sods clumps in them that have been fired red.  So it seems the people at the site might have been putting sod blocks on the fire for some reason.

Anyway, in a nutshell, we know what the prehistoric inhabitants left behind but we still do not quite understand what it all represents.

During the week my friend Gary C a geologist also visited, and had some good ideas about the site's situation up the valley.  He convinced me that the site was probably not directly on the ocean when people lived there and that tsunamis probably did not reach up to the site.

After his visit I am realizing that we REALLY have to survey the rest of the valley and find out where the old 4000 year old beach ridge was located.  We also have to precisely measure how far above current sea level the site is located.  My current theory is that site is located in an analagous location as the highway bridge over the Olds River.  On the Olds the tide floods a big tidal lagoon behind the beach berm and seals follow the salmon up to just below the bridge - the limit of extreme high tide water. 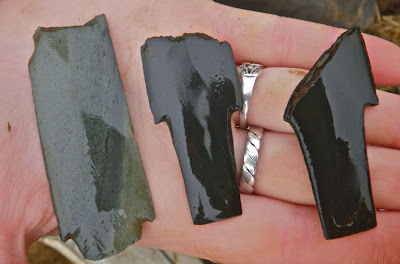 Above are 3 bayonet bases found by one volunteer excavator - we seem to be finding mostly the bases to bayonets and not as many tips. 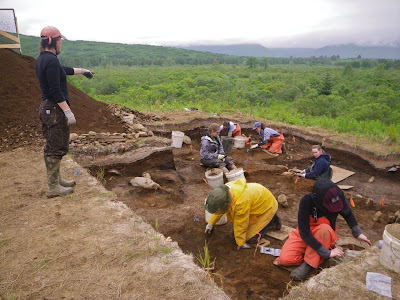 Above - Molly directs the crew while below is a picture from the top of a spruce tree that shows the site off to the right and the view down valley to Womens Bay.

Finally a view of Womens Bay on our commute to the site one morning.

Posted by Zoya, Patrick, Nora and Stuart at 8:13 PM