Back to Cool Kodiak 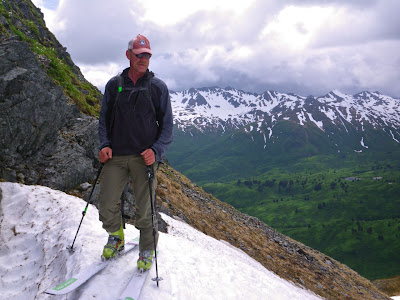 Maine was a good time but it sure has been nice to get back to the cool temperatures of Kodiak Island.  When we got off the plane and it was raining and 50 degrees I almost cried with happiness.

Yesterday I had to work on a Sunday because there was a cruise ship in town, and a man from the cruise ship asked me how we survived the winters here on Kodiak.  As he put it, 'what is there to do in the winter?'  I replied that I preferred winter to summer and that actually there is more to do on Kodiak in winter than there is in summer.  But then I told him that I had just been down in the lower 48, and I asked him how he managed to survive the summers down there.  The heat alone at 7AM in the gate between the plane and terminal at O'Hare in Chicago almost flattened me on the way home. How do people deal with such heat?

Anyway, It has been awesome to get back to cool temperatures, and best of all, we still have some pretty good skiing.  I was worried that the skiing would be done on close-to-town Pyramid Mountain by the time we got back from Maine.

Yesterday after work I ran into Steve and Sharon up on the Mountain and we skiied the North Bowl.  If you look closely in the photo below you can see Steve skylined at the top of the bowl.  Pretty good skiing, and it is now green everywhere down below.  Patrick 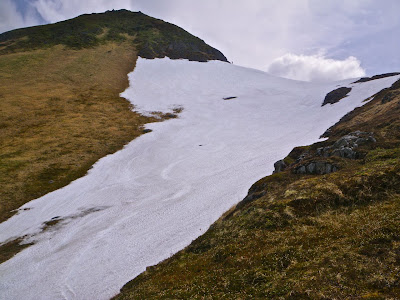 Posted by Zoya, Patrick, Nora and Stuart at 7:30 AM