On our trip 'out East' we spent the first 4 days in Rockport, Maine and the last 4 in Sherborn, Massachusetts.  In Maine we had a mile or so long loop that we walked a couple of times a day with Grandma Coco and Coco the dog.  The first part of the loop is through the woods and along the coast while the second half is across a golf course.

A day with Grandma 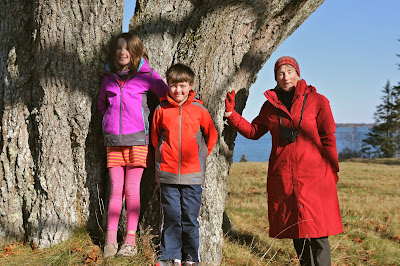 When we were still staying in Rockport, Zoya took a day to catch up on writing while Nora, Stuey and I took the ferry across Penobscot Bay to visit North Haven Island.  Over night the temperature had dropped into the high teens and it was a crisp, bright, 'Northwest wind' kind of day.  A glorious day to be outside. 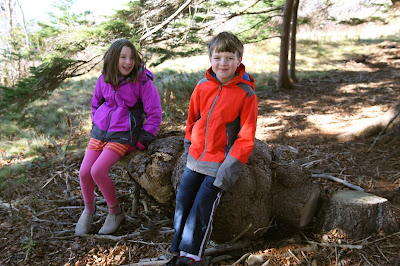 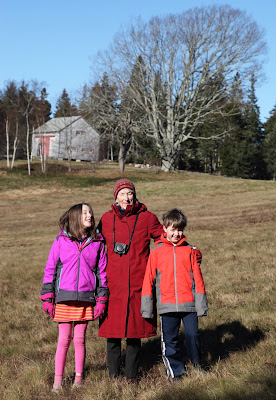 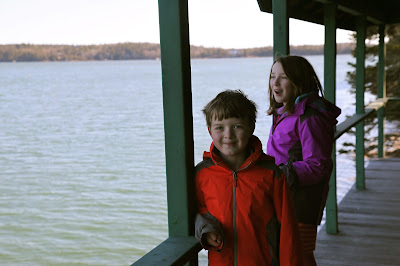 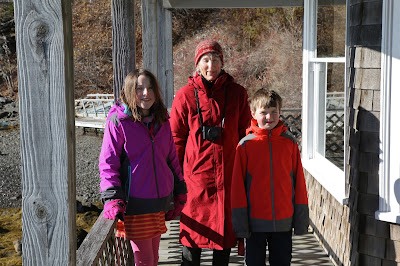 Posted by Zoya, Patrick, Nora and Stuart at 12:34 PM No comments: 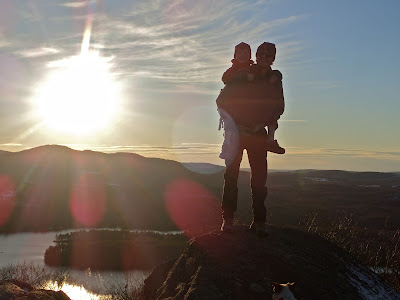 One of the important aspects of our family trip out East is that Nora and Stuey get to meet and know their relatives.  It is kind of weird for me too because for most of the cousins I last saw them when they were small.  Now they are all grown up.  So it is 'catch up' time for me and 'get to know' time for Nora and Stuey.

While in Rockport Stuey and I went for a hike with Stuey's Uncle Cam and cousin Bo.  Stuey would run ahead down the trail with Bo (or by himself) and then Cam and I would try and spot him before we walked past the hiding location - a low key version of hide and seek.

The snow under the deciduous trees a and near sunset light made for some dramatic visuals.  Big granite boulders and open vistas.  Quite the hike to get to know the cousins.  Patrick 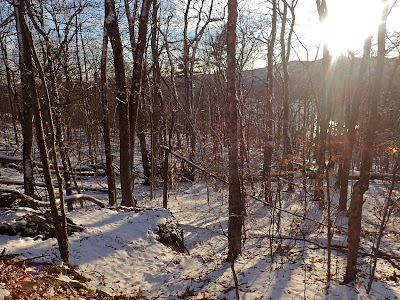 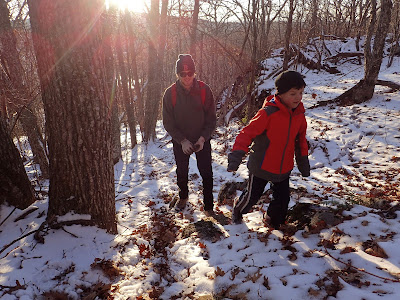 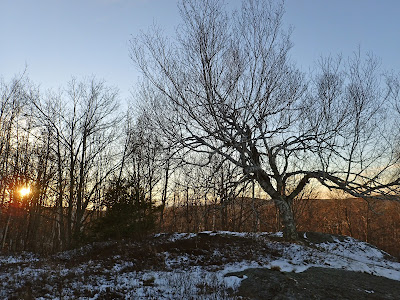 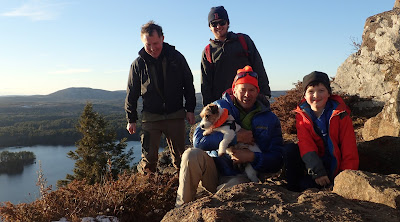 Posted by Zoya, Patrick, Nora and Stuart at 5:16 AM No comments:

On our second day in Maine, we ventured out to the Rockland lighthouse walk. It is a 2 mile round trip  and was constructed between 1881 and 1899. 18 years it took to obtain and place the large granite slabs in a puzzle-like fashion.

There were complaints of displeasure from Nora and Stuey before we started walking.  The instant they realized what a cool walk it is, Nora and Stuey were very into it.

The ocean breeze felt wonderful and the plaque at the end telling us about the lighthouse and the history of its construction made it all extra special. 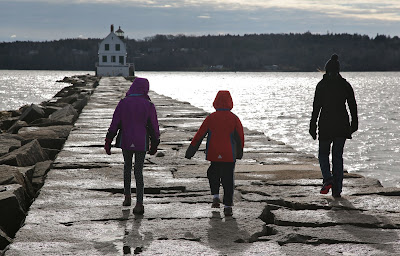 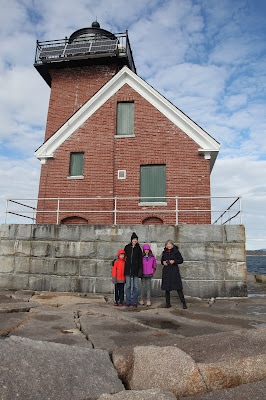 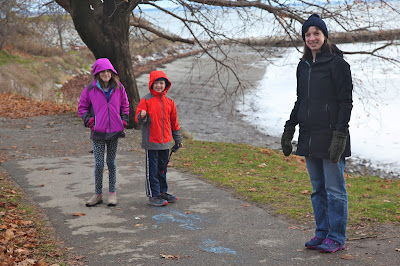 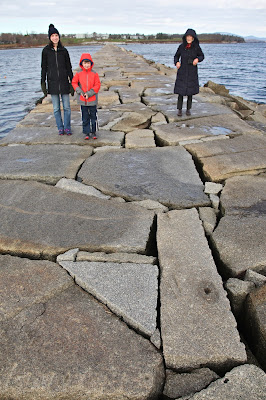 Posted by Zoya, Patrick, Nora and Stuart at 3:09 PM No comments:

Through the skies to Grandmother's House 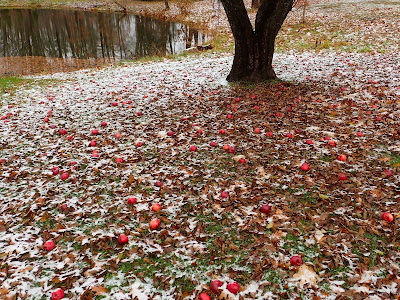 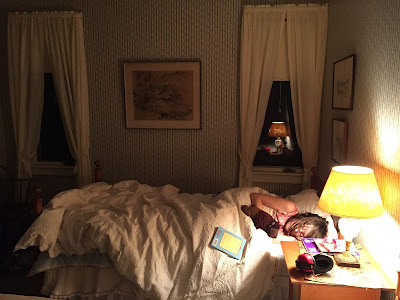 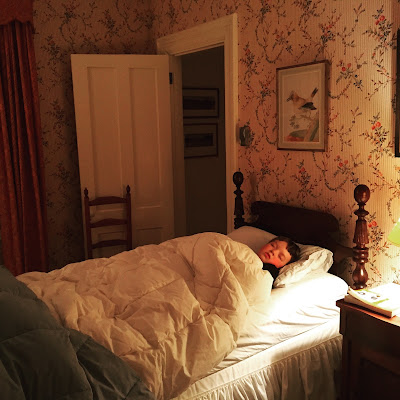 We've been at Emmy's house for 3 nights now and  have really  enjoyed lovely walks, delicious meals and laughter together. Emmy picked us up at the Boston airport at 6:00 Am and drove us straight up to Maine. I proceeded to pass out in exhaustion, as I didn't get much sleep the night before. The kids slept 12 hours their first night here and thankfully haven't had any struggles with the time change.

There is a mile loop which goes along the ocean and then along a golf course which I've enjoyed walking several times a day. The quiet, sleepy town of Rockport is so gorgeous this time of year. Traditionally we are here in the summer and I'm preferring this Thanksgiving time of year. The roads are quieter, establishments quieter, parking easier.

Tomorrow we head down to Boston for Thanksgiving Day and the rest of our vacation. Nora really enjoys looking at houses and architecture along the way. I enjoy seeing the East Coast through her eyes. 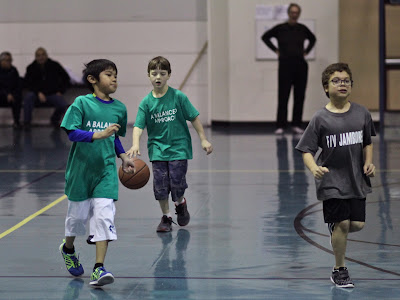 Several weeks ago Stuey started playing organized basketball for the first time-in the Kodiak Little Dribblers. It is a program which has been around for 30+ years and gets kids playing basketball in elementary school.

Stuey is on A Balanced Approach's team and the coach is Pete Danelski, another born and bred Kodiakian and fellow high school classmate in the 90's. His son Liam is in Stuey's class and i was grateful to have Petes kind and familiar presence for Stuey's first time playing basketball.

My sister and I sat in the bleacher together to watch the game with Nora. As the buzzer went off announcing the start of the first game, I admittedly got a little teary eyed. that buzzer struck a visceral chord in the basketball part of my soul.

The game was more  legit and official than I expected. The wall timer and score board was used, and two refs in uniforms ready to go.

The majority of the first 2 games involved a lot of teaching; how to pass the ball in, which basket to shoot in, and the very basics of defending your man. The refs took time to patiently explain and didn't blow the whistle for most travels and double dribbles.

A Balanced Approach has played 3 games and they haven't won one yet. Each game A Balanced Approach gets better, as the boys begin to understand the principles of the game. The most important thing is that Stuey is having fun and learning  the art of basketball.
Zoya 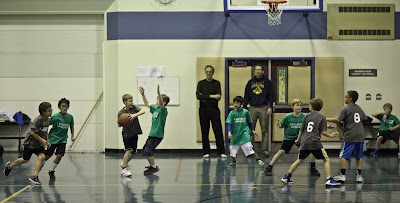 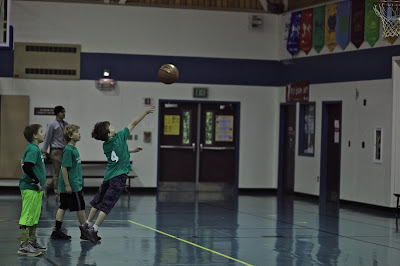 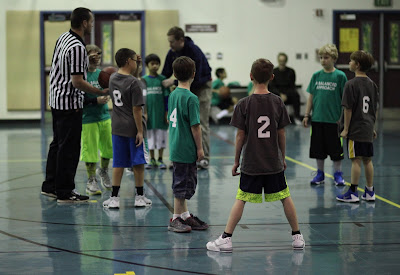 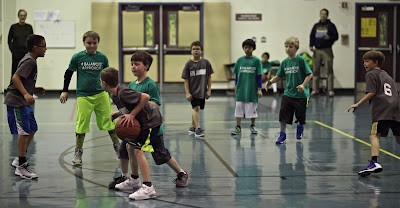 Posted by Zoya, Patrick, Nora and Stuart at 1:13 PM No comments:


'And that's a Norway Rat', Mike S proclaimed.  Mike was pointing out the window with his knife, and we all looked out to see a brown animal with tail chewing on one of the elk leg bones we had thrown out on the lawn earlier in the afternoon.  Everyone but me laughed as it hopped around from bone to bone and then disappeared around the corner of the house.  The elk hunt crew was butchering and packaging the elk from the hunt, and I had come to the realization that the Saltonstall household had a rat problem.

Rats are only funny when they are someone else's problem.

They are also a problem that on Kodiak eventually happens to pretty much everybody.  And for which everybody has an opinion. 'Use poison', 'traps are best', 'you must have chickens or a bird feeder', and 'I bet they are raiding your compost heap' are some of the more common opinions that I heard.

I don't like poison because I worry that our dogs will find it.  Also we used poison when we last had a serious problem about 10 years ago, and had a rat die under the kitchen.  It smelled for months.

So no poison - I bought rat traps.  Rat traps make mouse traps seem like miniature toys in comparison, and are scary to set. I was worried about breaking a finger, and would jump in shock every time I inadvertently set off the hare-trigger.  SNAP!  Setting the traps was like playing with dynamite.

The traps worked and for a week I tended my trapline. I checked the traps 3 times a day, and caught an unbelievable number of rats.  For the first couple of days I caught one in every trap twice a day.  Then the numbers started to drop off and the rats got smaller and smaller.  After about a week I stopped catching rats.  Worried that the rats had just gotten smart I also set out bait with no trap and had no takers.  It seems the rats are gone - I really, really hope so.  Patrick

Some that got away


Our family takes a lot of photos and it is a lot of work editing and backing them up.  Maintaining a blog helps us a lot with this process.

At our house once we put the pictures into iphoto on the computer we erase the pictures off of the card that goes back into the camera.  That way there is less confusion when we down load at a later date about whether a picture has been saved or not.  Once the images are on the computer I do an initial edit - getting rid of all the really bad photos.  Then all these photos are put onto an external hard drive (that is backed up itself by another hard drive).

The pictures that remain on iphoto are fixed up - colors adjusted, cropped, tones fixed etc. - and the best ones usually go here onto the blog.  All pictures that go onto the blog are put into their own file (by date) and backed up on hard drives separately.  Sadly enough, it turns out that these are generally the only photos I ever go back to look at - I mean who wants to look at thousands of unedited photos?

We do not use iphoto as a backup, and every few weeks I go back and delete most of the recent images.  The iphoto on our computer contains only the best of the best from the last few years.

Anyway, yesterday morning I was deleting photos from the past few weeks on iphoto, and found a few that never made it onto the blog.  And now they have!  Patrick

Posted by Zoya, Patrick, Nora and Stuart at 8:28 AM No comments: 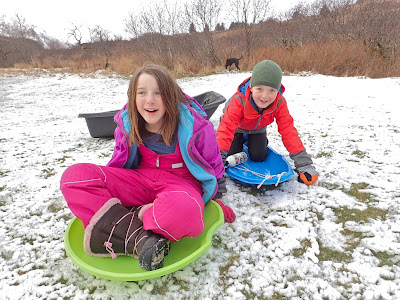 In the past week we finally got some snow and on Sunday I took the kids and dogs sledding at the golf course.  We first tried to drive up to the top of Pillar Mountain where the snow coverage is more complete.  However the road turned out to be a sheet of ice, and, after a scary moment sliding backwards half turned sideways, we decided to turn the rest of the way around and go sledding elsewhere.

The golf course had barely enough snow.  And while it may look a little green and desperate the sledding turned out to be excellent.  It was fast and the run was very long.

Yesterday we got another dusting of snow and I even went back to this corner of the golf course and did some skate skiing.  Round and round on a tiny loop until I had gone 5K or so.

It's good to have some snow and cold.  And some of the recent low temperatures have matched the lowest we got all last winter!  Patrick 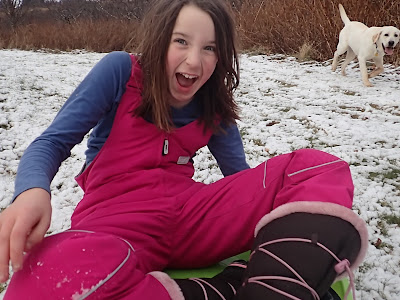 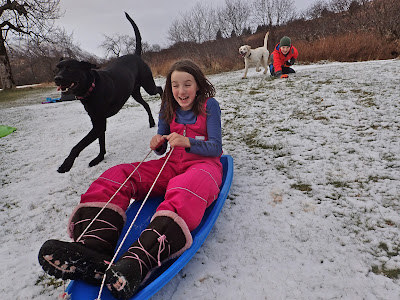 Posted by Zoya, Patrick, Nora and Stuart at 8:29 AM No comments:

These pictures are from over a week ago, and with our recent snow do not really reflect what it is like right now on Kodiak.  But if last winter's weather is any indication of what is to come the pictures may well reflect our activities later on this winter.

In any case they do reflect what we've been up to a lot this fall - checking out archaeological sites.  In particular, I have gotten into what remains from the WWII build up on Kodiak.  I managed to obtain a report written by another archaeologist documenting WWII sites, and it has been fun to relocate all the places he visited.  The report tells me what I am looking at and often has photos in it from when the structures were new in the 1940s.  There are also photos from the 1990s when the report was written.

What's amazing is how quickly the WWII material is falling into the ground and getting covered with moss.  The kids and I are helping to document this process.

But not everything we find is WWII related.  On this past trip we also found an old house depression that pre dates the 1912 Katmai eruption.  I know it is older than the eruption because it has ash from the eruption on top of the walls and floor.  So the ash fell after the house had already collapsed.

I think the foundation might represent an outbuilding from the nearby Russian era 'dairy' farm at the mouth of the Buskin River.  The rest of this farm was mostly covered up by airport construction during WWII so it is kind of cool to find a part of it still exists.

Posted by Zoya, Patrick, Nora and Stuart at 8:18 AM No comments: