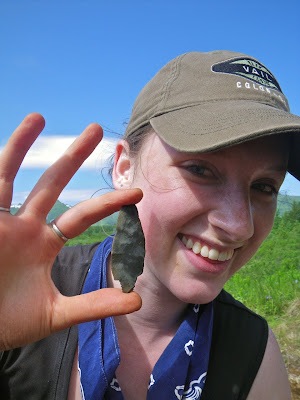 Molly has been doing such a good job writing updates about the community archaeology dig at the Amak Site that I have not had any incentive to write my own.  Molly's latest posts can be found here and here.  But I do want to post a few pictures from last week before they are too outdated.

In the photo above Andrea shows off a toy lance that she found.  It is made on a piece of slate too thin to be actually ground into a real point.  I like how the maker serrated the base just like it would've been done on a real lance.  Finding a toy indicates that kids were probably on the site.  I imagine a hunter and his son hanging out in a blind waiting for a seal to swim by - and to kill time the hunter makes a toy lance for his son.  That's my story anyhow.

Below is a picture of Molly on the screen.  The backdirt pile has gotten much bigger since I took this photo! 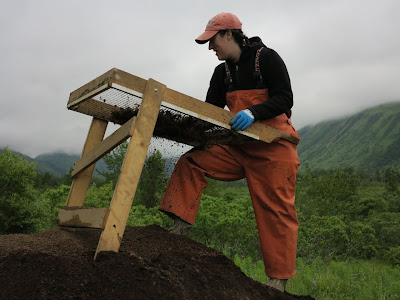 The students taking the dig for credit and Molly record a small hearth or processing feature that we found in level one.  Basically we found very few formal features in level one.  It looks like after 4000 years ago that people visited the site and occasionally lit a fire, but they did not build houses. 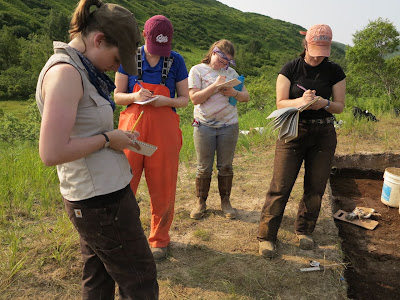 Tatiana shows off the base of the lance that she found that fits together with a lance tip that John S found.  You can see that it had broken in the past and that the prehistoric hunter was trying to re sharpen it, but for some reason (maybe it snapped) he/she gave up. 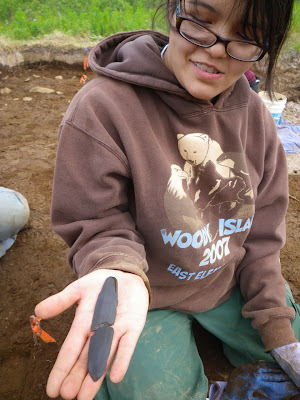 Below is the crew digging into Level 2.  Level 2 is basically a sterile volcanic ash that fell around 4000 years ago.  We found VERY few artifacts in Level 2.  Since taking this photo we have dug much deeper down into the site and are now digging features over 5000 years old. 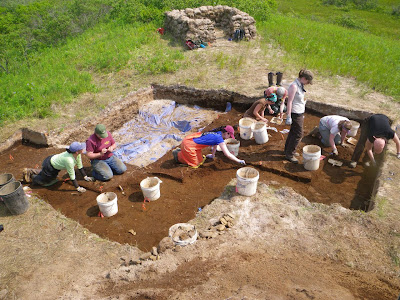 Tiffany looks at a far away bear that walked by the site.  For the next few days we saw him looking for fish on the other side of the road out on the tidal flats as we drove home.  We think he might be one of the 3 cubs we saw with a sow last year. 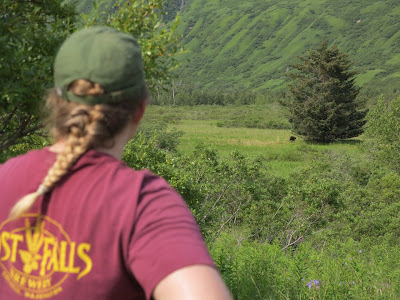 Posted by Zoya, Patrick, Nora and Stuart at 7:47 AM