Near Patrick’s moms house there is a tennis court and one day Leona and I decided to try our hand at some tennis. Neither of us have much experience but figured it would be fun to just hit the ball back and forth. 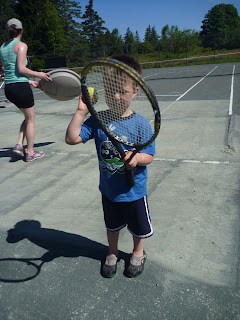 As we were playing, I noticed how the court was covered in a thick layer of dirt. It looked as if it hadn’t been swept in years. On the side of the court, I saw 2 large brooms hanging, and figured that people just hadn’t had a chance to sweep it lately. So I suggested to Leona, “How about we sweep part of the court today? It should help the ball bounce even better!” Plus, I figured it was all we could do to try to leave the court a little better than we found it.

We grabbed the broom and began the arduous process of sweeping the court. The day was hot and sweat poured off of us. We got to the point where there was  a huge stack of dirt that I wasn’t sure what to do with. There wasn’t a dustpan in sight, so I grabbed a garbage pan lid and began scooping the dirt with my hand into the lid.

That when Patrick discovered us. He was horrified.

“What are you doing?” He exclaimed. He had his hands slightly in the air with exasperation.

“What do you mean?” I replied. “We’re trying to make the court cleaner!”

“This is a clay court! There is supposed to be a layer of dirt on it!” Patrick explained.

Patrick then explained that it was a clay tennis court. It is supposed to have a layer of dirt on it. This is better on peoples joints, evidently. It is an older style of court. The brooms are there to smooth the dirt back out when you are done playing. Leona thought it was like a large Zen Garden…raking this dirt around!

It was then that Patrick began the process of dirt redistribution. He had serious sweat pouring off of him, as it was a big task with the large broom. And he knew how the final  product should look. Nora and I helped sweet the line off with the line sweeper gadget. Very fun. And Stuey had 1:1 ball hitting lessons with Leona on the side.

Patrick was very serious about getting our mess cleaned up as soon as possible, as he explained, “We don’t want the serious tennis people to come down and see this! They would be so bummed to see what you had done!” Fortunately no one saw the “damage” and we returned the court to good shape when we left.
When I think back to that afternoon, I get a good chuckle-the whole scene of Leona and I trying to sweep up so much dirt that was supposed to be there!! Our intentions were good! 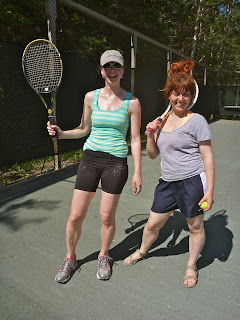 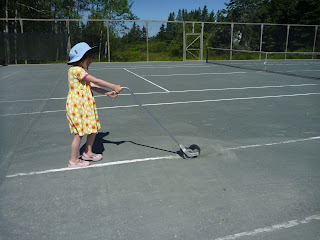 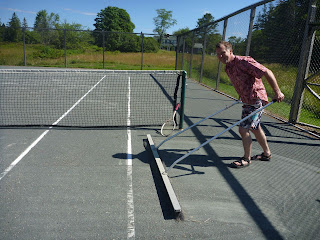 On the sidelines Leona gave Stuey a tennis lesson! 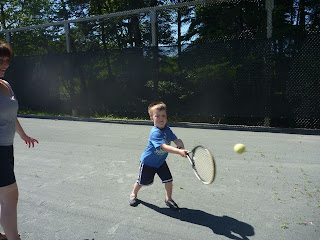 Zoya
Posted by Zoya, Patrick, Nora and Stuart at 5:50 AM