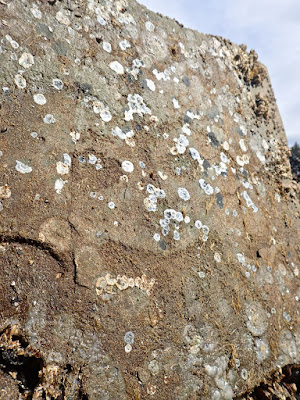 A couple of days ago I went on another survey to Afognak.  It was only a day trip and the main goal was to re locate and check on some petroglyphs.  Twenty years ago I was the last person to look at the petroglyphs when I visited with the original researcher who found them - Don Clark.

Don Clark drew the petroglyphs back in 1964, and then in 1995 with his help we relocated them again.  They are covered in barnacles and mussels and extremely difficult to find.  Even in 1964 before the land sank 5 feet during the Great Alaskan Earthquake they were still under water at high tide.  So after subsidence they ended up really low in the intertidal zone - hence the thick cover of molluscs.

On this visit it took us almost 45 minutes to re locate the pecked images.  We looked and cleaned the rock in the right place the first time, but just could not see anything.  I was worried that I had the location wrong, and we had basically given up when I went back and carefully re-examined the first place we had looked.  I cleaned up the rock and thought I saw a mouth.  But I was more than a little worried that I was making it all up.

Then after checking on a nearby site we returned to the petroglyphs, and suddenly the one face was very visible.  Wow!  It just popped out out of nowhere.

As you can see Don Clark did a very good job drawing the same face in 1964.  I think it just needs a bit more of a smile than he drew, but in every other detail it is very close.

What's cool is that I think it might represent the face of a woman.  To my eyes the lines below the mouth represent an Alutiiq woman with chin tattoos.  Patrick 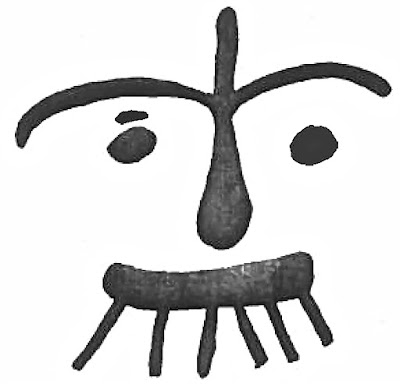 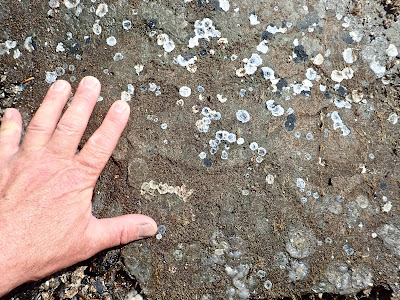 Posted by Zoya, Patrick, Nora and Stuart at 8:43 AM