Sheratin - Mountain of Many Moods 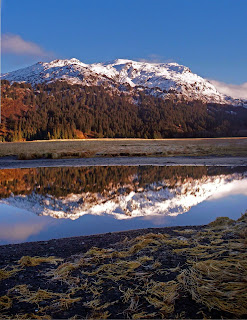 Judging by this photo taken yesterday afternoon at around 2:30PM, it is hard to believe that less than 3 hours later the mountain was socked in with clouds, leaving a team of workers setting up a cell phone tower on top stranded.

All day yesterday as I hunted deer down below I listened to the helicopter going back and forth to the top of Sheratin as the workers went about their business of setting up the cell tower. On my way home in the kayak It was flat calm but I noted that the top of Sheratin was already wrapped in fog and that the helicopter was circling and seemingly trying to land. I thought to myself - 'oh well, I guess they'll have to climb down on their own'. And thought nothing more about it. If you look at yesterday's blog post photo of my kayak and the water on my way back you will notice how calm and beautiful it was (@ 3:15 PM) - how could anyone be in real trouble on the top of Sheratin? But look in the distance and you will see the approaching clouds. The storm came in unbelievably quickly, by the time I got to the Anton Larsen Pass on my way home (@ 4:45 PM) it was already raining and totally socked in with fog.

By dawn the winds on top of Sheratin were approaching 100 MPH (sustained 40 MPH at the sheltered Kodiak airport), and it was snowing hard on the top of Sheratin. The barometric pressure dropped almost an inch and a half of mercury in 24 hours (29.8 to 28.55). Right now there is on ongoing rescue operation to get those guys off of the mountain. I am praying for their safety.

What a capricious mountain - in my photos from yesterday she looks so beautiful and serene it's hard to believe she'd already changed her mind. There's a lesson there, and I'm hoping I've learned it. Tonight I'm saying my prayers for those caught on her flank. Patrick
Posted by Zoya, Patrick, Nora and Stuart at 4:52 PM

Wow, how quickly Mother Nature changes her mind. My thoughts go out to those stranded on the mountain.

Patrick, how do you take such great photos?! I love the panoramic views especially one of the last ones with the kayak. What do you shoot with?
Peggy

And then there is always Photoshop! Actually, I never used to touch up photos at all and they seemed fine (I really do believe content, composition, and the 'moment' are really all that is key). But lately I have been touching my photos up a bit, and I always use photoshop to stitch panoramics together.

The Kayak photo from yesterday I actually did very little with (the light really was that glorious!), but the one of the mountain from today I did a lot, and I think it shows. I did not post it yesterday for this reason, and only posted it today after the recent events made it relevant.

It is actually two pictures stitched together. I shot the mountain and bright snow and then shot the dark foreground. I stitched them together along the sunny grass strip in the middle. That way the exposure seems right over the entire picture and you don't have a washed out, bright mountain, or a pitch black foreground. This is a good technique (for a crappy point and shoot) and I've used it to great success in the past - you just have to carefully consider where you'll join the photos as you compose the picture. Only with this photo the mountain and the reflection had different colors and things were still washed out or too dark. So viola - lots of photoshop. In the end it looks pretty much like what I saw, but I'm not happy with the surreal blue of the sky or the high contrast snow. It seems like a picture from a magazine.

Anyway, long reply to a comment, but I must admit I have been thinking about the whole touching up with photoshop thing, and you just struck a cord.

So, it really is the photographer and not the camera ;) You do have an eye for good composition.

I'll have to try that "stitching" thing in Photoshop.

Ha ha. Sorry if I created a monster.

Say hello to Zoya for me.

Patrick,
that type of exposure adjustment was very common back in the days of "real" darkroom photography. Didn't Ansel Adams use the same sky in a number of different landscapes? I don't see anything wrong with it at all. You're an artist. And am waiting impatiently for you to do a show at the fly-by. Now, if you photoshopped yourself look thinner or with plumper lips, that might be going too far...

Pixie and Isiik, I think Kodiak also helps with photos - Pixie, in the same vein, your Denali photos were pretty darn spectacular!

So Ansel Adams used that technique too - damn. I thought I invented it. I've also found it works pretty good for depth of field focus. Like with bear tracks - I take a photo practically looking down (they are close and look huge), then a middle distance, and finally the horizon. Stitch 'em all together and viola - you got bear tracks in focus from 2 feet away into infinity (I did this with my brother and bear tracks on the Ayakulik back in October).

As regards photoshop - Now I don't feel too bad. I was worried I was altering reality. But I really do try to 'fix' things to the way they really were. Sometimes I feel our cameras don't actually capture the light like it really was - so we need to actually pump it up, make it warmer etc. Patrick