The Holiday Season comes to an end 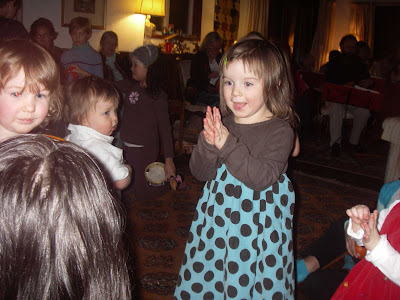 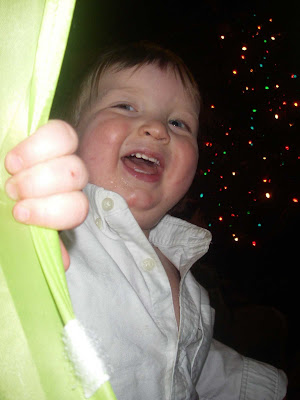 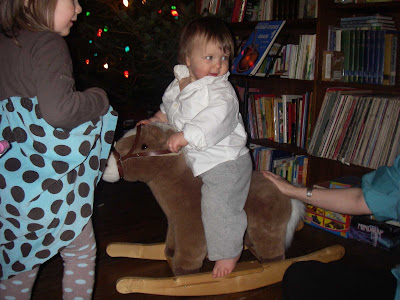 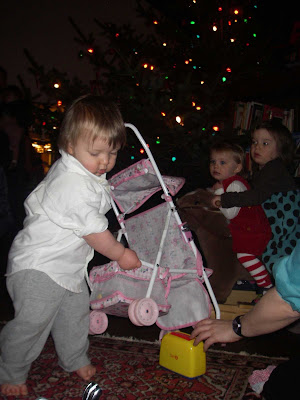 Last night marked the final holiday party of the year. The Eufemios holiday party-complete with 18 foot high tree, balalaika players, delicious spread of food (the baked ham and beans are always Patrick's favorite), and lots of kids running this way and that - even dancing holding hands in a big circle while the balalaika players played. It has become one of my favorite holiday traditions.

This year Nora AND Stuey were wholly entertained for the solid 3 hours we were there.There were lots of toys which were new to them, books and Roxann. (In fact, when it was time to leave, Stuey threw himself into a series of back arches and everyone watched as I made a beeline for the door---I looked like a professional baby wrangler, if I might say so myself....)

This year, there were close to 30 kids at the party and the different age groups of kids would race from one area of the house to the next. Nora played a lot with CeCe and Katies daughter. During the live holiday music, Nora and Natalie held hands and swayed back and forth. It is so fun to see the beginnings of friendships and social interactions with Nora. Stuey alternated between playing with a little doll stroller and this big 4 wheeler type of truck. I joked with Patrick...."Its all over now---he's going to want a four wheeler for his 2nd birthday...."

Nora dancing among the kids with the balalaika players in the background.
Stuey peeking in the kids tent.
The rocking horse, a big party favorite amongst the kids.
Stuey with the sought after doll stroller and Nora joining CeCe on the rocking horse.
Posted by Zoya, Patrick, Nora and Stuart at 3:47 PM