On our recent trip to Afognak I brought along my 'good' camera.  My 'good' camera is a fragile SLR, and I've found I tend not to use it because it is inconvenient to get out of the waterproof case etc.  Numerous times in the past I've brought it along on trips and then only used the indestructible, waterproof, point-and-shoot camera instead.  But it does take gorgeous pictures.

On our last trip I had noticed that the harlequin ducks perch on the petroglyphs at high tide, but it was too far away to photograph with my point-and-shoot.  So I was bringing along the big zoom and pixel power of my good camera, hopefully, to capture this image.   I also wanted to take some low light tree pictures under the forest canopy.

Anyway, it almost worked.  In the forest based on what I was seeing on the camera screen I thought I was taking GREAT pictures.  But then I got home and noticed that in the low light I often had not held the camera steady enough and that I had depth of field issues.  I should have put the camera on a tripod and upped the aperture to get a deeper field of focus.  If you look at some of my stitched together forest panoramics you'll see these issues, but they still look compositionally good.

As regards the petroglyph and ducks photo - the light was never right.  The harelquins did perch on the glyphs, only the light did not cooperate.  The petroglyphs only 'pop' and become visible in certain light conditions, and it just did not happen.

Oh well, I guess I'll have to lug along the good camera to Afognak once again.  Maybe the third time will be the charm. 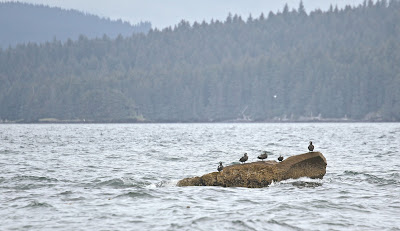 Posted by Zoya, Patrick, Nora and Stuart at 8:25 AM

Are those photos SLR or digital? That's the thing about SLR, Patrick - you have to think. Having read this post I will not never take out my old SLR, I am way past thinking these days. :-)