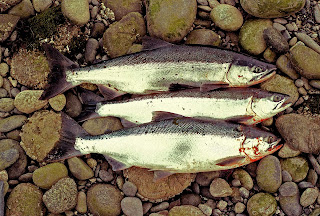 Imagine what Alaska’s fishing industry would be like if Americans ate as much canned salmon as they do canned tuna. And why don’t Americans eat more canned salmon? The answer to the latter question is obvious to anyone who has ever opened a can of commercial grade, canned salmon – with all the skin, bones, and smell it’s more akin something you would feed the pet cat than something you would want to pop open and eat for lunch. Perhaps this is why the market for canned salmon is so poor – and the only people who can stomach the stuff are elderly Brits (a group not well-known for their epicurean tastes).

I know I was dead set against canned salmon, until one day on a whim I opened a can of Fields Wild Salmon ‘premium’ sockeye. I was shocked to find that it was actually pretty darn good stuff. Zoya and the kids liked it too. It even inspired Zoya and I to start canning our own salmon. Now we regularly eat canned salmon, and we supplement our own supply with the store bought Fields Wild Salmon brand. It compares favorably with our own (it is pretty darn good stuff). It got me thinking why isn’t all canned salmon as good and could the canneries put out and market something even better? I think they could.

A few years ago Zoya and I visited my college roommate in Costa Rica. Tomas runs a tuna canning company. We got to visit his plant on the coast at Puntarenas, and, expecting a run-down, third world operation, we were shocked to find a state of the art canning facility. A canning facility that makes Kodiak’s plants look third world. And they are – Kodiak’s canneries are basically doing the same thing with canned salmon that they did 50 years ago.

The Costa Rican facility was so high tech my friend would not allow us to take pictures of the machinery and operations inside for fear his competitors would see it and he’d lose his competitive edge. I found out that he has been canning silver salmon from Kodiak in glass jars to sell in high-end stores in San Francisco. He told me that Ocean Beauty puts the frozen fish in a container and sends them to his plant in Costa Rica because none of the Kodiak canneries have the ability to make such a high end product. Sadly enough, he has since stopped using Kodiak fish and now uses Chilean farmed salmon because he could not get enough fish from Kodiak to meet his demand. What’s wrong here?

Moving the subject back to Kodiak, why don’t we have state of the art canneries? It seems that lately the fishing industry has been moving to improve fish quality with ice water in the holds etc. But those improvements really don’t help much if you’re still canning the stuff the same old way. The improvements do help with frozen filets etc, but can you imagine how much bigger the market for Alaskan salmon would be if people started to like eating canned salmon? And to be honest, good canned salmon blows canned tuna fish away. I know my kids prefer it. Patrick
Posted by Zoya, Patrick, Nora and Stuart at 3:23 PM

I would rather eat canned salmon than fresh farmed salmon. I believe salmon should be wild. I worry about growth hormones, antibiotics, who knows what is given to farmed fish to ensure the highest harvest/profit.

We've been eating Fields' canned salmon in our field camps for several years. It's one of our favorite main ingredients in several meal recipes.

The Field's canned salmon is GOOD salmon. I just wish all canned salmon was as good. We mix it up with ritz crackers and spices and make patties (a recipe straight out of the 'Joy of Cooking' that Rose kinsley showed us). Unbelievable! Patrick