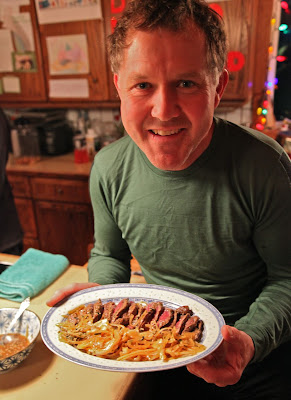 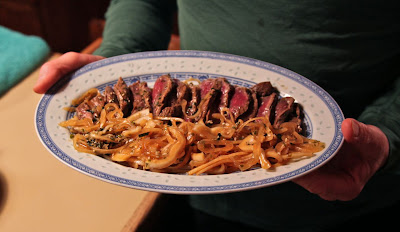 One of our local restaurants serves up an appetizer that I really like that they call ‘beef tartar’. It is strips of seared but basically raw meat ‘cooked’ by the acid in lemon juice and is served with onions and slices of kiwi. For a Christmas dinner party we attended I thought I’d try something new and attempted to ‘back engineer’ their recipe. It came out GREAT and was completely gobbled up. Here is my recipe.

Ingredients needed (I do not measure things per se, but just add pinches and splashes – so be aware that all of the amounts specified are my best guess). You may need to adjust accordingly to suit your own taste!

1 Deer backstrap or tenderloin (I used tenderloin and I do think that the meat chosen should be a tender cut)
3 large pinches of kosher salt (maybe a tablespoon or 2 – enough to coat the meat used)
1 tablespoon sesame oil
1 tablespoon grated ginger divided
1 cup lemon juice
3 tablespoons soy sauce
1 ½ tablespoons of sugar
2 teaspoons of nori komi furikake rice seasoning (I was looking for the Aki Nori seasoning I’ve used in the past for seaweed salad but all I could find was some stuff I’d bought for seasoning sushi rice – it contains sesame seeds, salt, sugar and seaweed)
1 teaspoon of sesame seeds.
1 small onion VERY thinly sliced
1 peeled kiwi (optional) (I did not have a kiwi to use but I think I’ll add some as garnish at the end the next time I make this)

Steps:
1) Coat the deer meat in salt and sear in the sesame oil in a cast iron skillet that is almost smoking hot. I added some grated ginger to the pan just before I added the meat. I seared the meat very quickly – just long enough to create a brown crust. Maybe 30 seconds a side.
2) Remove meat and set aside on plate to cool. At this point I coated the meat with rice seasoning (nori komi furikake).
3) In a bowl mix up the lemon juice, soy sauce and sugar. I also added extra grated ginger and sesame seeds.
4) Slice onion as thinly as possible and add to marinade in bowl.
5) By this time the meat has cooled and I sliced it as thinly as I could and added it to the marinade (I tried to keep it all together as a piece of meat for appearances sake later). Make sure the marinade covers onions and meat completely. You may need to add extra lemon juice or rice vinegar.
6) Cover and leave in the fridge so that the meat and onions can ‘cook’ in the acidic marinade. I left it in there for 8 hours.
7) Plate the dish and add kiwis if you want. Since I had kept the meat all together it was easy to put all the strips onto the plate in their original order.
8) Enjoy! Some of the people at the party ate the meat and onions on crackers but I just wrapped the meat around a few onions at a time and ate them.

PS This is Zoya now...I can vouch for the DELICIOUS-NESS of this recipe. It was amazing. Couldn't believe how good it turned out!!
Posted by Zoya, Patrick, Nora and Stuart at 7:46 AM

And it was! I can't wait to try adding the kiwi. I plan on making a platter for the burger grind party this sunday. Patrick