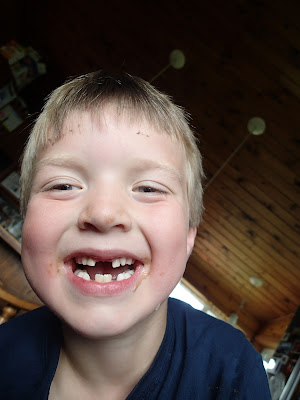 In the past 4 weeks Stuey has lost 5 teeth, two of which he pulled himself when they became wiggly.

1 was lost while eating an ice cream sandwich at Chuckee Cheeses. (He realized an hour or so later when it was suddenly gone)

1 was lost when rough housing at the grocery store.

1 was lost at Afognak.

Stuey has a "blood on himself" phobia...I just looked it up-called "hemophobia".

Or if he falls and hurts himself, as long as there isn't blood, he's ok. He'll quickly ask, "Am I bleeding? Am I bleeding?" When we say "No Stuey, theres no blood" an air of relief comes quickly over him.

So with losing 5 teeth in such a short time,  the bleeding and stopping the bleeding are his primary concern.  He almost obsessively shoves a wad of paper towels into his mouth for 30 plus minutes until he is assured and reassured by us that he won't lose even a speck more of blood.

Zoya
Posted by Zoya, Patrick, Nora and Stuart at 8:52 PM