Rachel, Matt, Ramsey their dogs, Pauline, Andy and Piper left at the end of day 3 and it was suddenly a very quiet camp.  We missed the company of friends but it wouldn't be long before another friend would join us!

At night we missed Rachel and Matt's camp dogs when a fox started to cry. The dogs had been good at keeping the foxes at bay.  There wasn't a breath of wind. The absence of surf and wind sounds is unusual, and it accentuated the fox's intermittent yowling.  A very eery and scary sound.  Zoya and I were surprised that it did not scare or even wake up the kids.

The next morning was idyllic and after breakfast we hung out on the beach.  The kids made their city in the sand complete with roads and houses.  Feathers acted as currency and they could buy rocks from me to build their houses.  I also acted as the bank for their feathers.

We lit a fire and cooked hotdogs.  The kids pushed sticks into the fire and then played with the smoking ends.  They would stand sentinel with the sticks smoking at their shoulders.  We expected our friend Thomas to arrive but he caught us by surprise when he finally did arrive around noon.  He drifted up quietly in his kayak.  No motor boat noises to tell us someone was coming.  Patrick 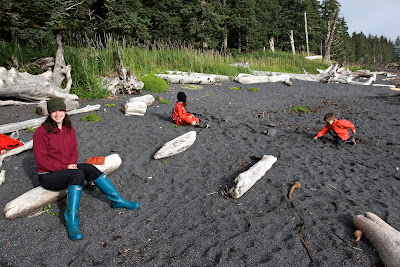 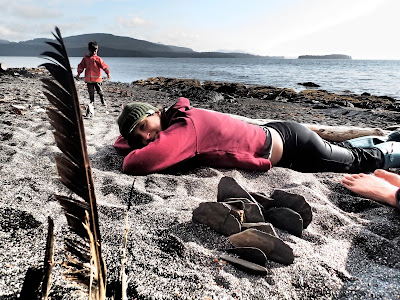 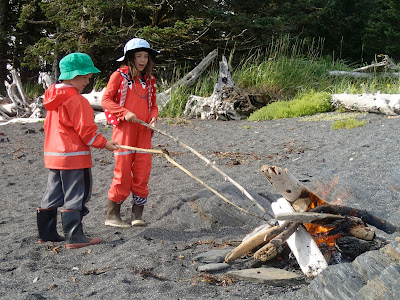 Posted by Zoya, Patrick, Nora and Stuart at 5:41 PM