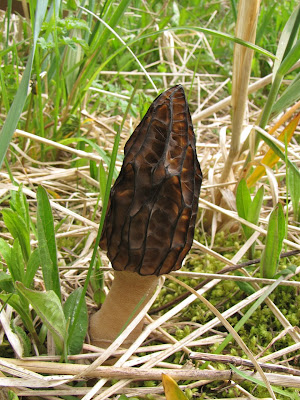 For the last three weeks while in the field I have been gathering and cooking up quite a few wild plants.  Mostly, just like in years past, we gathered and ate the nettles and fireweed shoots growing on the sites we were testing.  But this year on Afognak the crew I was with showed me a new plant - Morel Mushrooms.  I think we ate them every night on Afognak.  I would've never dared eaten them unless someone told me that they are edible.  On Afognak we also ate a lot of beach lovage and lambs quarter (chenopodium) - seaside plants we don't usually get to eat when we survey on rivers and lakes in Kodiak's interior. 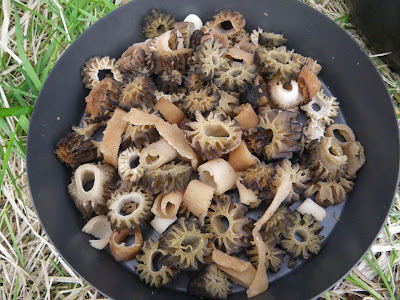 Our recipe for the mushrooms was really simple.  Cut them up, quickly saute in oil and then add some heavy whipping cream.  That's it.  Sometimes we also added them to the daily pasta or rice and beans meal.  Morels are good and very easy to cook.  Just like the mushrooms you buy in the store! 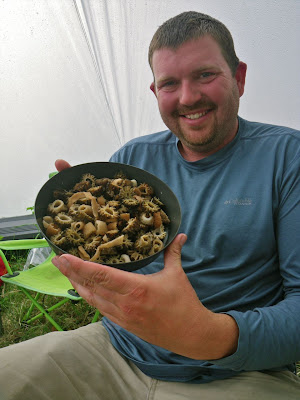 On Afognak we were also given a freshly caught red salmon.  I decided to cook it in a new, less messy way.  My recipe is as follows:
1) Cut and fry up a red onion and 1/3 of a red cabbage in plenty of peanut oil (this is true of every meal we cook in the field).  For this meal I added old bay seasoning and a squirt of garlic from a tube.
2) After the onions and cabbage have browned and reduced I add the pasta pack - I used a pack of bowtie pasta.  Then I pour in boiling water up to just below the top of the pasta.  I put the filleted and skinned fish on top of the pasta and covered it with slices of manchago and baby bell cheese.  I also sprinkled on some nettles.
3) Then I put a tightly sealed lid on top and put the whole dish on the wood stove.  Once I could hear that the water inside was boiling I moved the pot to a cooler section of the stove.
4)  After about 20 minutes I checked on the fish and pasta and both were perfectly done and all the water absorbed by the pasta.  I added heavy whipping cream and served the pasta and fish.  The salmon was perfectly steamed!

This dish got rave reviews from my fellow archaeologists. 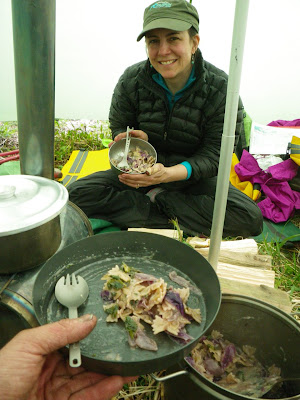 On the Karluk River Jill and I tried a new way of cooking nettles.  We basically made nettle pesto.  Jill picked a bunch of really tender nettle tips
1) Then I did the usual fry up a red onion and a 1/3 of a red cabbage in peanut oil.  I added old bay spice and garlic too - just like above. Once the onions and cabbage had reduced I added the nettles and tossed them until coated in oil.  Then I added water to the frying pan and flash sauteed the nettles.
2) I put the reduced veggies into a big pot with a tight sealing lid and added the pasta.  Then added the water until just below the top of the pasta.
3) Return to boil on the wood stove and then add 3 or 4 baby bell cheese and a healthy dose of manchago cheese.  Then we let it sit on a cooler area of the stove for 20 minutes or so until the pasta had sucked up all the water.
4) When the pasta was done I added heavy whipping cream and some basil pesto from a tube, and stirred it all up.  The tender nettles had sort of melted into the pasta and created a 'pesto sauce' of their own.  Jill and I thought it was delicious! 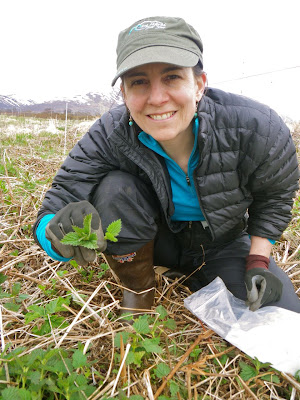 Finally, I did bring a bag of lambs quarter back from Afognak and put it on top of a pan of roasted potatos - with you guessed it - plenty of manchago and baby bell cheese.  We decided that lambs quarter is WAY better than spinach.  It lacks that aciddy/chalky taste that spinach imparts to the mouth. And it is also free and found in large quantities at local beaches.  Patrick

Posted by Zoya, Patrick, Nora and Stuart at 7:11 AM