Thursday night I got back from my survey of Old Afognak Village.  We mapped all the structures and tried to figure out what was what based on old aerial photos and the local oral history.  We had a composite aerial of the entire village from 1962 and each standing structure on it was named.  However, we also found lots of buildings that did not show up on the aerial and also lots of pits and old foundations.  We mapped and described them all.

My main job was to look for prehistoric archaeological sites, and surprisingly enough, I did not find any new ones.  The early 19th century Russian Afognak Artel is supposed to be in the area and I tried very hard to find it.  But no luck. I did find what I believe is the foundation of the first Afognak Village Church, and I did find lots of what I thought were old building foundations but what turned out to be gardens.  I put a lot of test pits into old gardens.

Anyway - I also took a lot of photos.  Here are a couple of the panoramic photos that I stitched together.  The top photo is of the swamp behind the village.  I took this same photo later in the summer a few years ago.  The photo below is of the woods behind the old school building.  The woods were beautiful but very difficult to photograph.  The photos never seemed to capture it quite right.

Below is an old building resting in the lake behind the south end of town.  Many of the buildings got moved by the tsunami in 1964 and were not resting in their original spots.  Prior to the 1964 earthquake there was not even a lake in this area!  Patrick 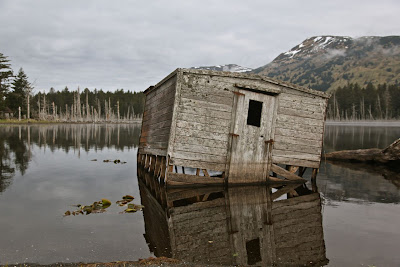 Posted by Zoya, Patrick, Nora and Stuart at 7:31 AM