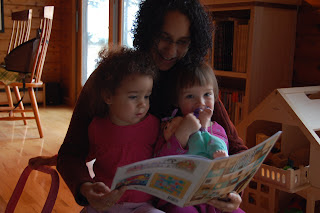 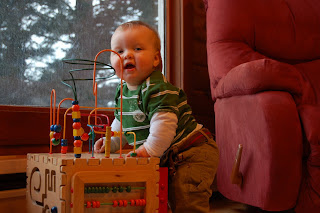 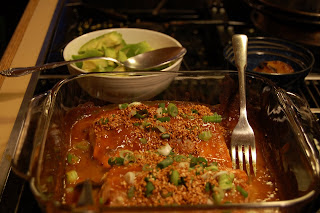 FRIENDS-
Yesterday Nora and I went over to Grace's house-I borrowed clothes from Alexis for the wedding I"m doing this weekend-a whole other blog entry. (No, I'm not getting married...I'm doing the marrying...)
Nora had a BLAST playing in Grace's kid-kitchen. Alexis put a kid apron on her, there were kid oven mits, play dishes, fake bacon, mini blender, silverware....Grace and Nora ate a big feast. Nora used the oven mit to take the pot on and off the stove.  There was even an adorable dishwasher with a rack that came out! So realistic!
When Alexis went in later in the afternoon to clean up after we had left, she noted that Nora had cleared all the dishes from the table into the sink. She said this was definitely something Nora did, as Grace doesn't do that. We laughed at how our kids become "mini-me's" because here at our house, we load our dishes into the sink then Patrick puts them in the dishwasher every morning. She learns her cleaning skills from Patrick-I'm the first to admit that!
CORD-MAN
Stuey is addicted to cords. Nowadays he is on the move-and on the lookout for any available cord. I have to watch him like a hawk. There have been a couple of cord-close-calls where he pulls on the cords....He gets a mischievious grin on his face and books it for the cords. There is one set of stereo cords where they come out of the floor (wired underneath our living room for speakers-thank you DICKY!!!) and into the stereo. I have tried to tape it up repeatedly to make it inaccessible, but it never works. He makes a beeline for the tangle of cords.
I tell him "NOT FOR BABIES" in a semi-stern voice and he sort of looks at me shocked. Lately he laughs or smiles. Its so hard to use a "mean" voice with him because he is so cute-even when he is doing something hes not supposed to. I have to get meaner. Such a mama's boy, I say.
NEW YEARS REZ
So far so good with my New Years Resolution. When I announced to Patrick that I was going to do this, he replied, "I think its too much for you to expect to do. Maybe try 2 recipes a month." But I wasn't backing out. I committed myself.
Black Bean croquettes were the first recipe. I got the ingredients all ready and put the recipe on the counter before I left to teach my spin class. I was prepared to make them when I got home from class. When I arrived home at 5:30, I was pleasantly surprised as Patrick had prepared the entire recipe and they were going in the oven! What a great way to start my resolution-Patrick can cook the recipes and I just find them! He, He....
Patrick's co-worker recommended a miso-glazed salmon recipe. SO GOOD! See photo. With Silver salmon Patrick caught last fall.
Zoya
(Photos: Top-Alexis, Grace and Nora look at a quilt pattern together at our house,
Middle-Stuey at his toy block
Bottom-Miso salmon prepared by Patrick. YUMMMEEEE!!)
Posted by Zoya, Patrick, Nora and Stuart at 9:35 PM