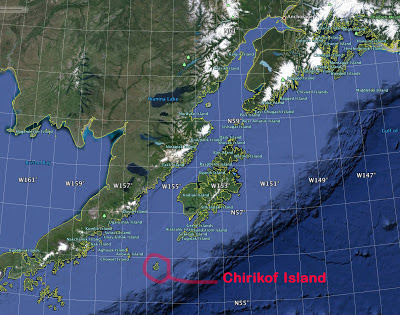 Catherine is in charge for this trip - I'm just the camp logistics guru - and the goal is to test the old faunal  middens and see what birds the prehistoric inhabitants ate (and discarded in their middens).  Then we will compare what we find to what's out there today.  Hence the bird survey aspect.  How exactly has the ecosystem changed?  For instance, did the prehistoric inhabitants have access to puffin colonies or other ground nesting species that the introduced foxes and cows have since eradicated?

After our first survey we determined that ground squirrels have lived out on Chirikof for at least 2000 years.  The United States Fish and Wildlife Service had planned on eradicating them because they believed that Russian fur traders had introduced them to the island and wanted to return the island to its 'natural state'.  Our work proved that the ground squirrels pre-dated the Russians, and, hence, the USFWS did not have to eradicate them.

Anyway, it'll be good to get back and see how things have changed.  It'll be REALLY nice not to be in charge, and the beachcombing will be GREAT.  Patrick

Posted by Zoya, Patrick, Nora and Stuart at 5:15 PM