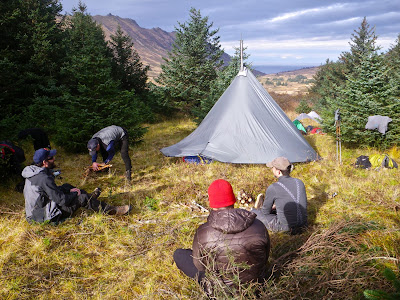 During the elk hunt every night onshore we spent in a teepee with a woodstove.  This year we schlepped along a teepee big enough to fit us all.  In years past we have used 2 smaller teepees and have broken up into groups, but I figured we'd have better camaraderie if we all stayed together.  Amazingly enough at about 3 1/2 pounds (with pole) our TiGoat teepee weighs about the same as one of our smaller teepees did in the past.  And the TiGoat cylinder stove weighs less than 2 pounds.  So our shelter and stove needs came out to about 1 pound per person - that's pretty light!

And the teepee is HUGE - all five of us fit inside of it easily and we could have all slept inside as well.  Only Justin liked his space and did sleep under a tarp outside (he also likes to sleep a bit little later than the rest of us).  But we did have a space for him and it was not crowded inside at all.  There is nothing quite like cooking on and sitting around a woodstove until bedtime, and then waking up to a warm tent.  We often experience hardship during our elk hunts but our camps are pretty darn cush - no hardship there. 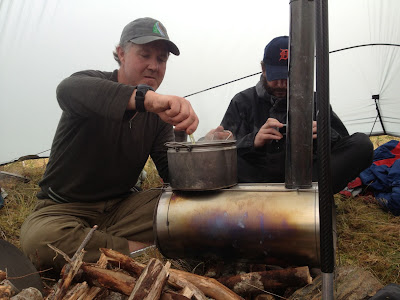 Brand new TiGoat cylinder stove gets used for the first time (only the body is new - the rest has been heavily used in the past).

Our second camp in the spruce forest - note that the stove is starting to look used.

Another from inside at our first camp - my but we look clean cut.  Later on during the hunt we look much more beaten down. 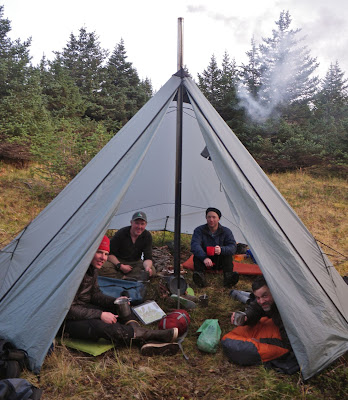 All of us but Justin inside the teepee - he's taking the picture.

Our teepee is nestled into the short spruce on the right - the last time we camped at this spot we got 2 elk the next day.  This year it did not work out that way.

Posted by Zoya, Patrick, Nora and Stuart at 8:42 AM