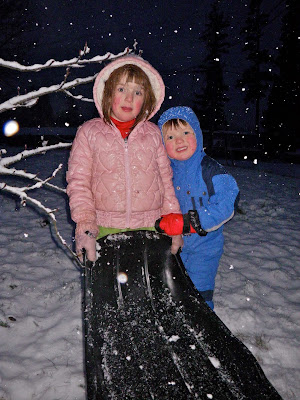 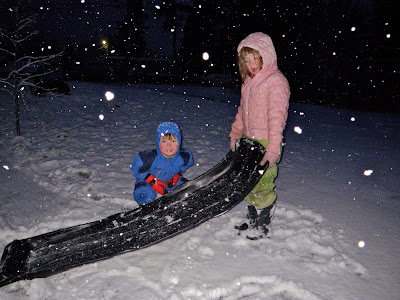 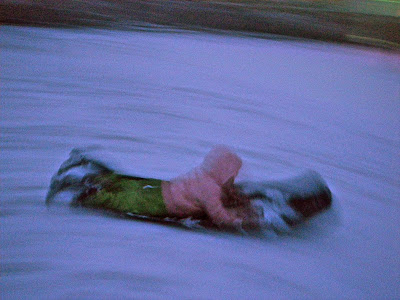 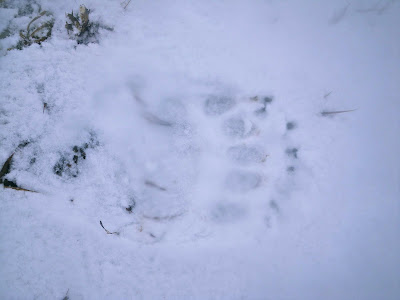 Today we woke up to snow on the ground. It got us thinking about 'first snow' and what it means to each of us in the family. For Zoya, the "first snow" was stepping in a patch of it on the top of pyramid. For Patrick, the first snow really counts when he can walk in it. For the kids, it means there has to be enough snow here at sea level to play in it.

-Kids first snow: This morning there was enough snow falling before school that the kids put on their snowsuits and went sledding before they went off to school -in the dark.

-Zoya's first snow: At the end of October we hiked up Pyramid to go ptarmigan hunting. We did not find any ptarmigan, but Zoya did get to hike in the snow.

-Patrick's first time on snow was during the Goat hunt (3 weeks ago). It started to snow and while wandering around in the whiteout they ran into a sow and cubs. The bottom photo is of one of the bears footprints taken after they were charged by the bear.

Today Patrick went for his first ski of the new season. He skate skiied for 45 minutes around the golf course, and was amazed at how tired he got. Snow season is here! yeah!

Zoya and Patrick
Posted by Zoya, Patrick, Nora and Stuart at 4:07 PM