Archaeology in the Desert 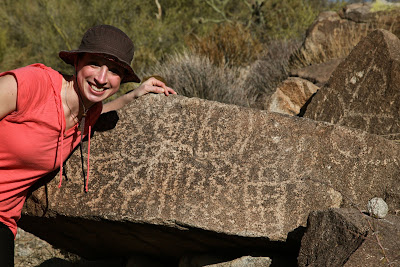 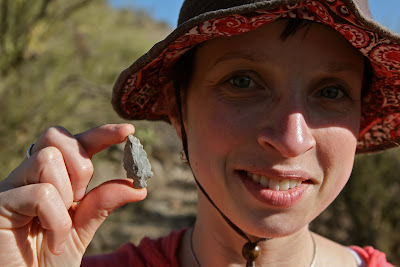 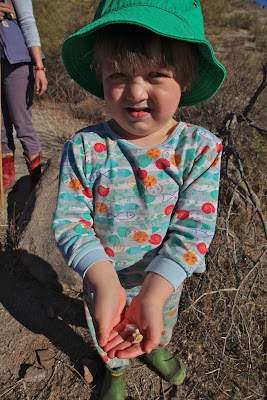 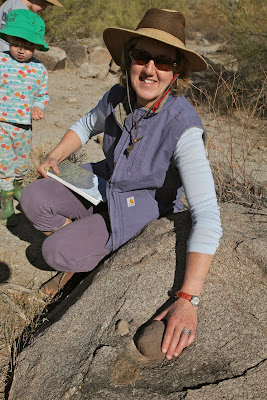 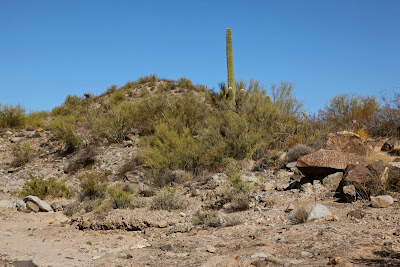 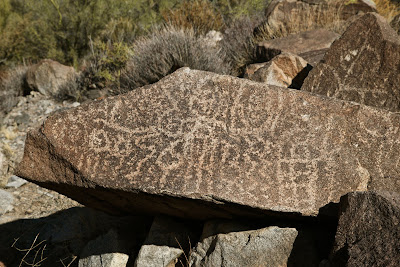 Yesterday we all hiked up a nearby wash to look at some ancient petroglyphs. Somehow, despite almost 40 years of exploring and visiting the area AND another 25 years or so as a professional archaeologist, I had never visited or seen the petroglyphs. They lived up to their billing - VERY cool.

The glyphs (top 2 photos and bottom) are only lightly pecked into the weathered granite. No where near as deeply pecked as the ones I am used to examining in Alaska. In the wash directly in front of the glyphs animals had dug out a hole in the sand down to water, and I wonder if the glyphs were there to mark the water? Or perhaps to act as magic to keep the water flowing?

It was fun to visit the glyphs with my cousins and kids - I don't usually get to play 'the archaeologist' with family around. And I remembered that I had found an ancient campsite near the glyphs. So we went looking for it. It was a little disconcerting to realize how little I know about archaeology in the desert. Totally different place and archaeology than what I am used to experiencing by the sea in Alaska.

It took a while to find the old campsite, and we even found the little piles of artifacts that I had left in place 20 years earlier. I don't think many people know about the site because all the scrapers and chipped stone points are all still there on the surface (I strongly suspect that not even the State archaeologists know about the site). No one has picked any of the artifacts up, and I must admit, it was a little difficult to convince the kids NOT to keep the beautiful tools that they found (see stuey with his first artifact and Zoya with a notched chipped point).

We left all the artifacts in place, and I think I convinced them that removing artifacts destroys the site's integrity. Everyone agreed that it was cool to see the mano still in the metate (the mano ground mesquite beans or something in the metate hole)(fourth photo). We even found old tent rings with all the chipped stone flakes lying all around dropped just where the prehistoric inhabitant had left them.

Everyone kept asking what we had found - how old was the campsite? And I kept thinking that if we were on Kodiak I'd know everything. But in the desert of Arizona I really do not know the local culture history. Still, I noted that we did not find any pottery so that it must be a pretty old site. And the mano and metates indicated that people seemed to have stayed there a while and that it was probably not a temporary hunting camp. But I'll have to read some books about Arizona archaeology to get some more insight!

Patrick
Posted by Zoya, Patrick, Nora and Stuart at 4:17 AM

that's amazing to find the stone flakes in situ on the ground! we have a few of those flake sites in Sweden. so vulnerable yet in place after all this time.. amazing! definitely in need of documentation.

Actually in the States most archaeology is still done by 'whites' - mostly academic based. But that is changing, and I work in a museum that is run by the local indigenous population. Museum, community based rather than academic, university based archaeology is becoming more and more common, and I think it is a good thing.

Anyway, there is a lot more to this, and I could go on and on. I remember in graduate school we discussed this a lot and there was a great theory book by Bruce Trigger that discussed just these issues called 'the History of Archaeological thought'. You might want to check it out.