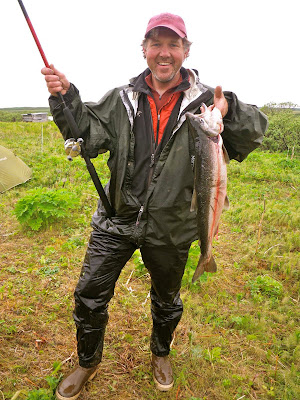 During the past year around Kodiak bottom trawlers caught over 40,000 chinook salmon as bycatch. Since they were bycatch the salmon were dumped over the side and most of them probably died. What's scary about this is that Chinook or King Salmon are in trouble. King salmon numbers are way down. Some rivers like the Karluk River on Kodiak have even been closed to fishing for the last couple of years. So what's with the trawlers catching a couple million dollars worth of these same fish and dumping them over the side to die?

In the picture above I am holding one of the 3 kings I caught last summer. By law I am only allowed to catch 5 kings a year when fishing on inland rivers, and really that is enough fish to feed my family. But you can bet your last dollar that if I caught 6 kings the troopers would be on me like white on rice. So why aren't the trawlers penalized for catching 40,000 extra kings? I have heard that this fall the trawlers continued to fish in an area of Shelikof Strait where they were catching lots of kings as bycatch. They made multiple trips to this spot even when they knew they would also catch a lot of kings. But why not?- no one is penalizing them for catching too many kings.

Trawlers are required to dump their bycatch over the side so that they cannot make a profit on it. But it is still a wasted resource. 40,000 kings is well over a 1/2 MILLION pounds of fish - more than a couple million dollars worth. That's a lot of wasted fish. I think trawlers should be required to process and bring all that fish back to Kodiak. All the fish should be sold and then ALL the money should be used as a sort of fish tax to pay for observers, salmon research, harbor improvements etc (anything fisheries related except lobbying). Cleaning, processing and filling their holds with all that extra fish would be a penalty of sorts for the trawlers and I bet they'd go out of their way to catch less bycatch. And none of the resource would be wasted either. They should also have to stop fishing when they catch a certain number too, say 20,000 kings.

Anyway, I've been trying to learn about the issue and while cruising the internet I have found a few fisheries related blogs that are worth visiting (all linked on the side of our blog here). I highly recommend checking out the video posted on the Tholepin blog.

Until you watch the video bycatch is just a word. But in the video you get to see a couple hundred dead and dying halibut unceremoniously dumped over the side as bycatch. Skip the first 3 minutes of the video and watch the end where you get to see the dead halibut floating away.

Other good blogs are:

A couple of other blogs are more biased against trawlers but seem to be pretty factual.
http://tholepin.blogspot.com/
http://notrawlzone.blogspot.com/

What's funny is that I could not find any good factual blogs presenting data in favor of the trawlers. Could someone please tell me their side of the story? Why are they allowed to continue to catch and throw away so much fish? Patrick
Posted by Zoya, Patrick, Nora and Stuart at 5:15 PM

In theory, it seems absurd that fishermen can be so wasteful and negligent. However when it comes to ocean life and laws that protect it, nothing is ever done to preserve a species until it is almost too late.

I do think your proposal sounds like it could actually work, and be beneficial to Alaska and its waterways. The fishermen might think otherwise.

Most trawl boats (except for the huge factory trawlers) do not have the ability to process and freeze those fish onboard which means the fish would have to be brought to a processor in town for processing. Then you're going to have the processors use their labor, freezers, and shipping company to process that fish for free? Processors are a "for profit" business, no way they'll process 1/2 million lbs of salmon for free. Also, there wouldn't be much of a market for these salmon so the amount of money that could be raised to fund other projects is very low. Yes, there is a very lucrative market for some King salmon, but not trawl caught bycatch King salmon. Trawl fishing is not easy on the quality of the meat. Trawl bycatch salmon meat will be heavily bruised and mushy before it even gets onto the boat let alone adding a couple day trip back to town. These Kings would be very substandard in quality. So you aren't going to raise nearly as much money as you think. I'm not saying there isn't a huge problem with 40,000 Kings killed but the solution isn't easy to come by.

In regards to Jowers Inc: I should have added in the post that the Kodiak industry is very diverse and that trawlers are only a small part of it. A great many people in the Kodiak fishing industry probably would like to see the trawlers severely curtailed. Trawlers are the ships that drag nets behind them and often damage the bottom of the ocean. They catch most of the pollack that gets turned into fish sticks etc.

In regards to Kodiak Man: Great stuff - you obviously know a great deal more than me about the Kodiak fishing scene. Perhaps the huge factory trawlers should be required to process and sell their bycatch while the smaller trawlers should have to bring in their bycatch and give it away for free to the processors to get turned into sarimi and fertilizer etc.?

Also while I am not employed in the fishing industry I do subsist on fish from the local waters and very much want healthy fish stocks. For this reason, if the trawlers can't do something about bycatch I think that large areas of the ocean should be closed to trawling.

I also realize that bycatch is not limited to trawlers (I was appalled to learn what setnetters find dead in their nets) . All segments of the local fishing industry should be doing everything they can to limit bycatch.

Finally I really do believe that bycatch should not be thrown overboard and wasted. However, nor should bycatch be sold at a profit for the people who caught it. I also realize, as Kodiak Man pointed out, thatr it is a VERY complicated situation and a solution will not be easy to realize.