I just got back from a 29 hour mountain goat hunt with Brooks H.  The short story is that we took a float plane to the head of a nearby bay, hiked up into the mountains, camped, woke up and harvested a goat at 9 AM the next day - and then slogged back to the sea burdened down with meat and camping gear. We just beat the rain and got back to Kodiak in time for dinner.  A hard hunt to be sure, but, for the first goat hunt in a long time, nothing went dramatically wrong.

But of course there is much more to the story.  The hike in was 6 miles and almost 3000 feet up there, and the landscape was stunning.  There were bears everywhere along the river near the bay where we started our trip.  Salmon heads littered the banks and we could see fresh tracks in the sand.  It was so hot we saw a bear just hanging out in the water to cool off, and Brooks even took his shirt off for the climb to the alpine.


Once we got up to the alpine we set up camp.  We decided not to hike any further into the mountains because we did not want to spook the goats out of the country.  Brooks headed further up the ridge to scout for goats while I set up camp.  I was relieved to find plenty of dry wood for our woodstove, and this at 2000 feet.  By the time Brooks got back from scouting (no goats nearby but some on a FAR ridge) I was cooking a rice and beans dinner on the woodstove.  Earlier a HUGE deer had run panting by camp (I swear he had his tongue hanging out) - clearly spooked by Brooks on his scouting trip. 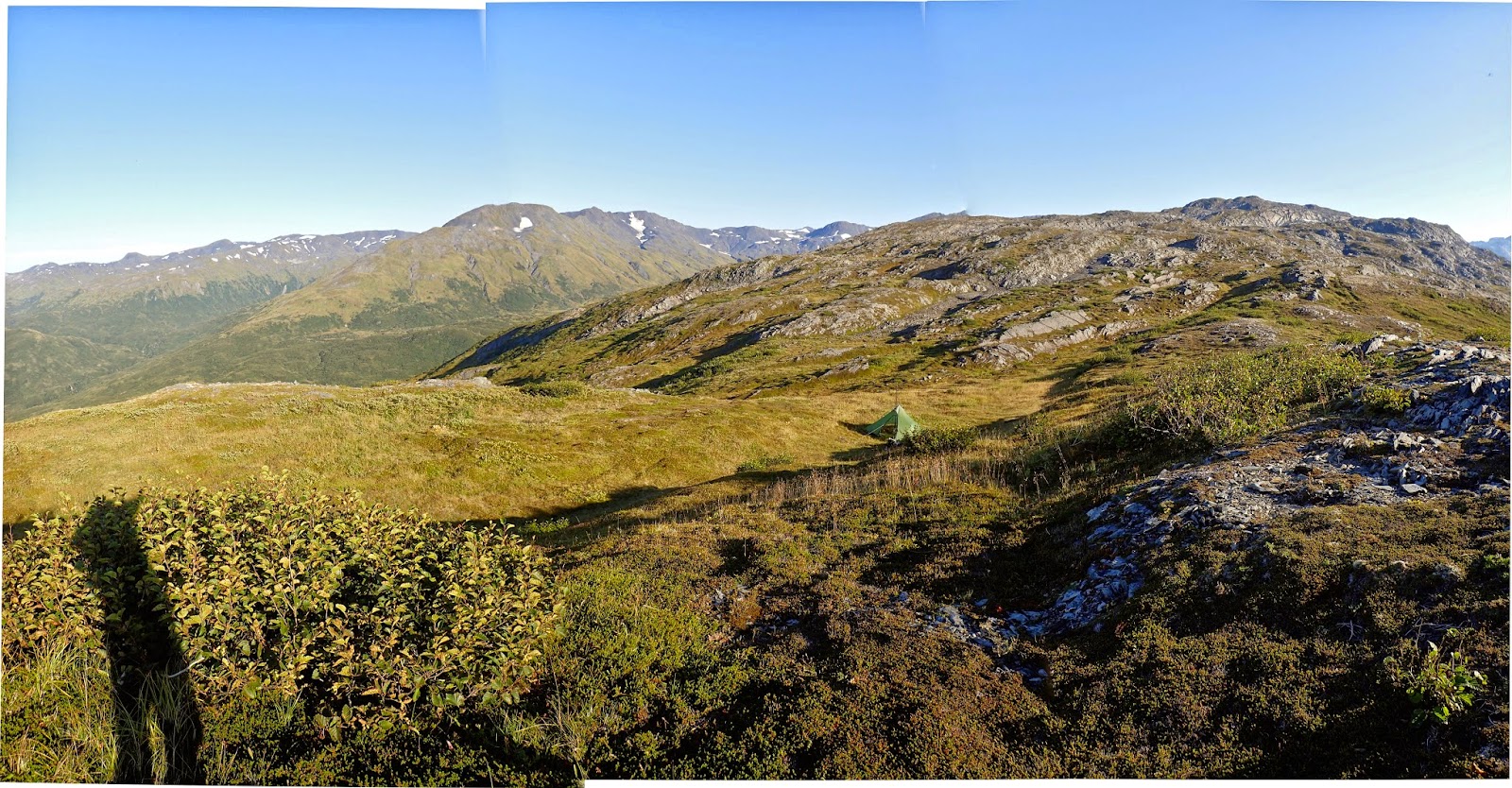 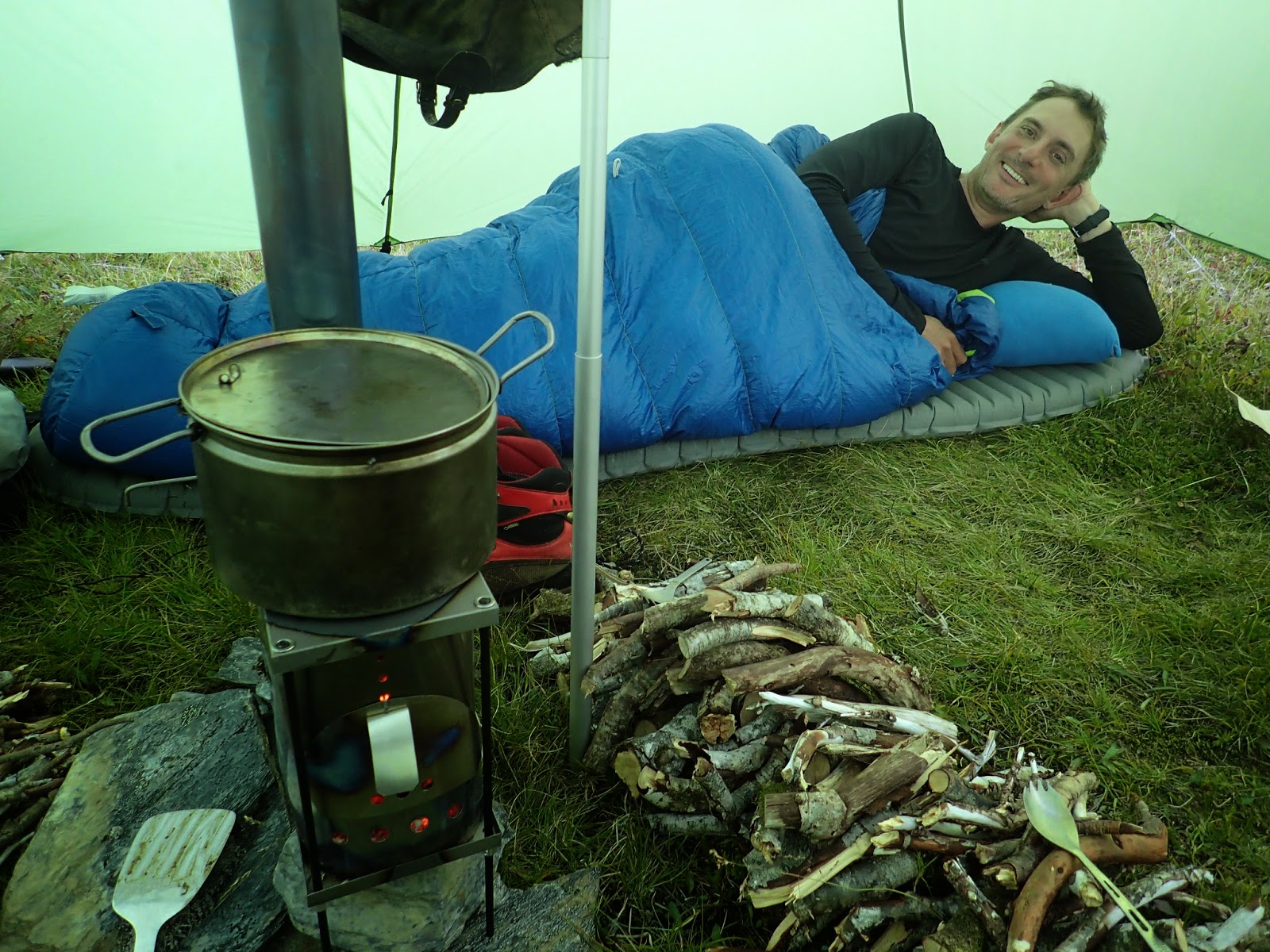 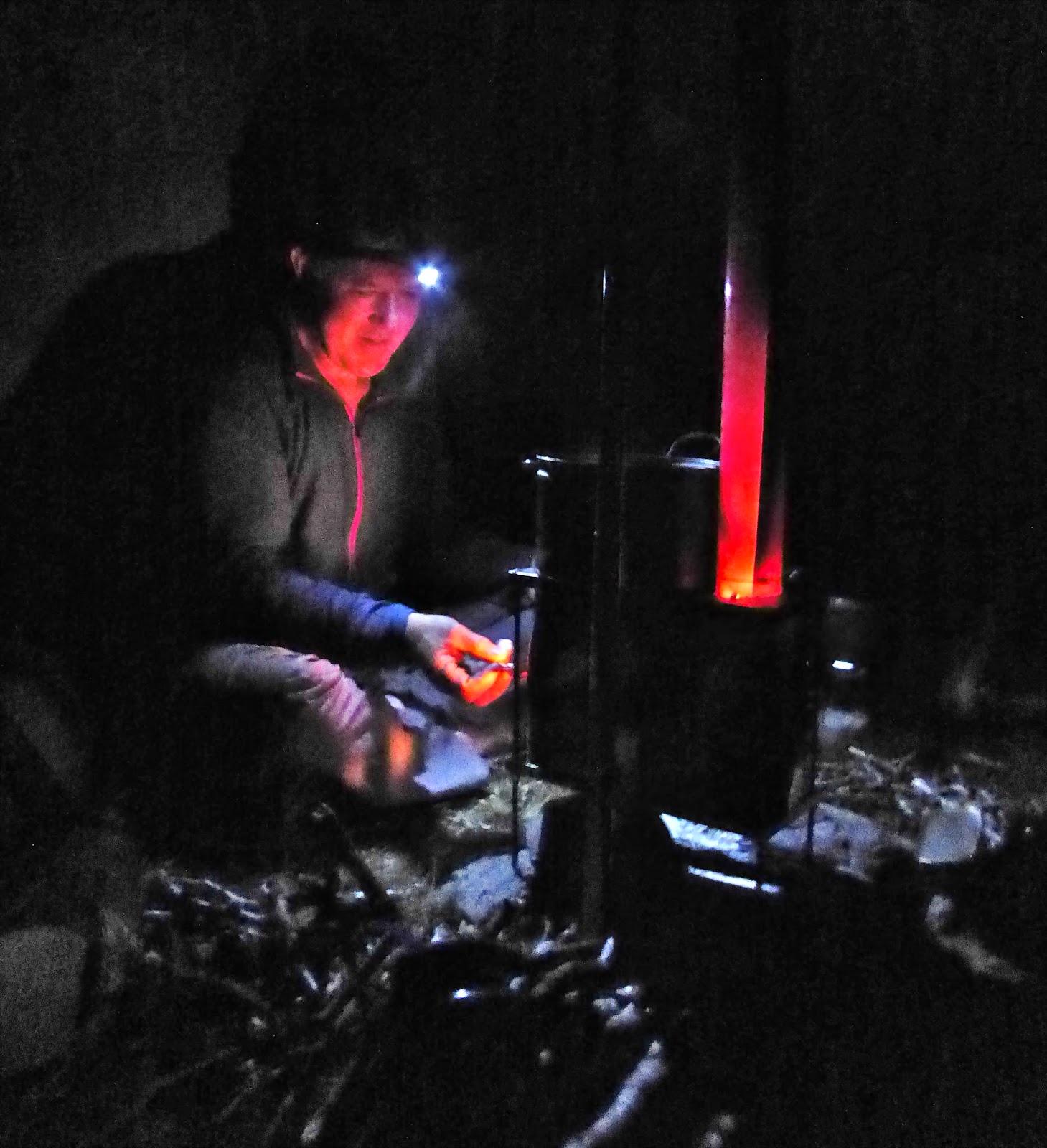 The next day, we woke up in the dark, and lit the stove.  Brooks later confessed that there is no better sound than the clinking of pans while lying in bed and KNOWING that soon the woodstove would be lit and there would be coffee.  After a leisurely breakfast we were off as soon as it was light enough to hike without headlamps.  We were not sure if we'd get a goat and carried our entire camp with us so that we could deal with any contingency. 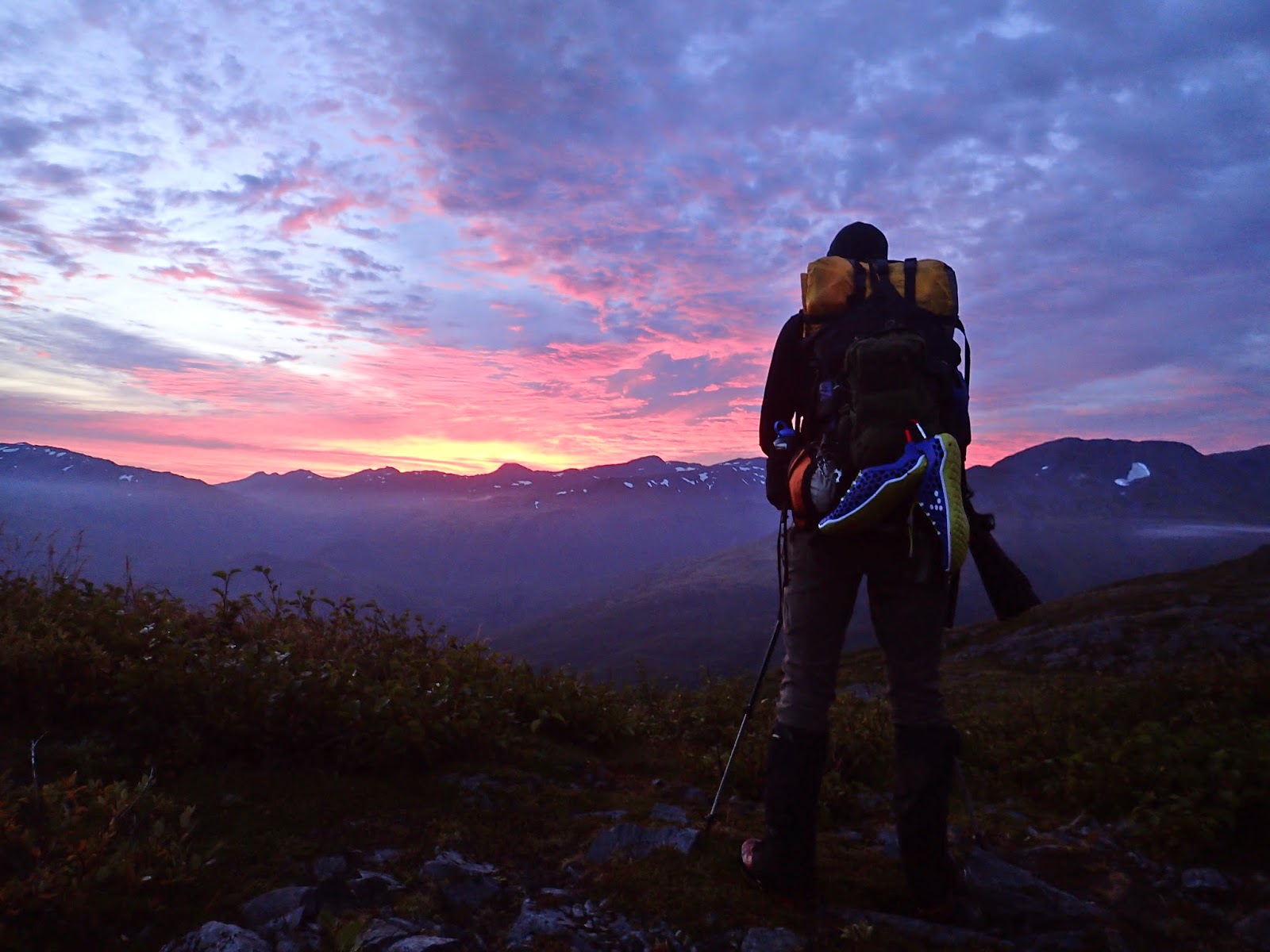 But as luck would have it we did find a goat before 8 AM and Brooks had it down by 9 AM.  That is quick work!  Best of all it died on a flat place and did not jump over any cliffs. He shot it perfectly through the lungs and clipped the spine, and there was very little in the way of spoiled meat.  But the goat was pretty darned big.  I'd sort of been hoping that Brooks would harvest something small, and easy to carry back to the sea.


Soon after the euphoria of the harvest ended we realized we had a big job a head of us.  Our packs each ended up weighing 120 pounds and it was six miles as the crow flies to the ocean.  And we had a time crunch.  Rain was in the forecast and if we wanted to get back to town before the storm we had to be at our pickup spot by 6:30 PM.  So off we trudged. 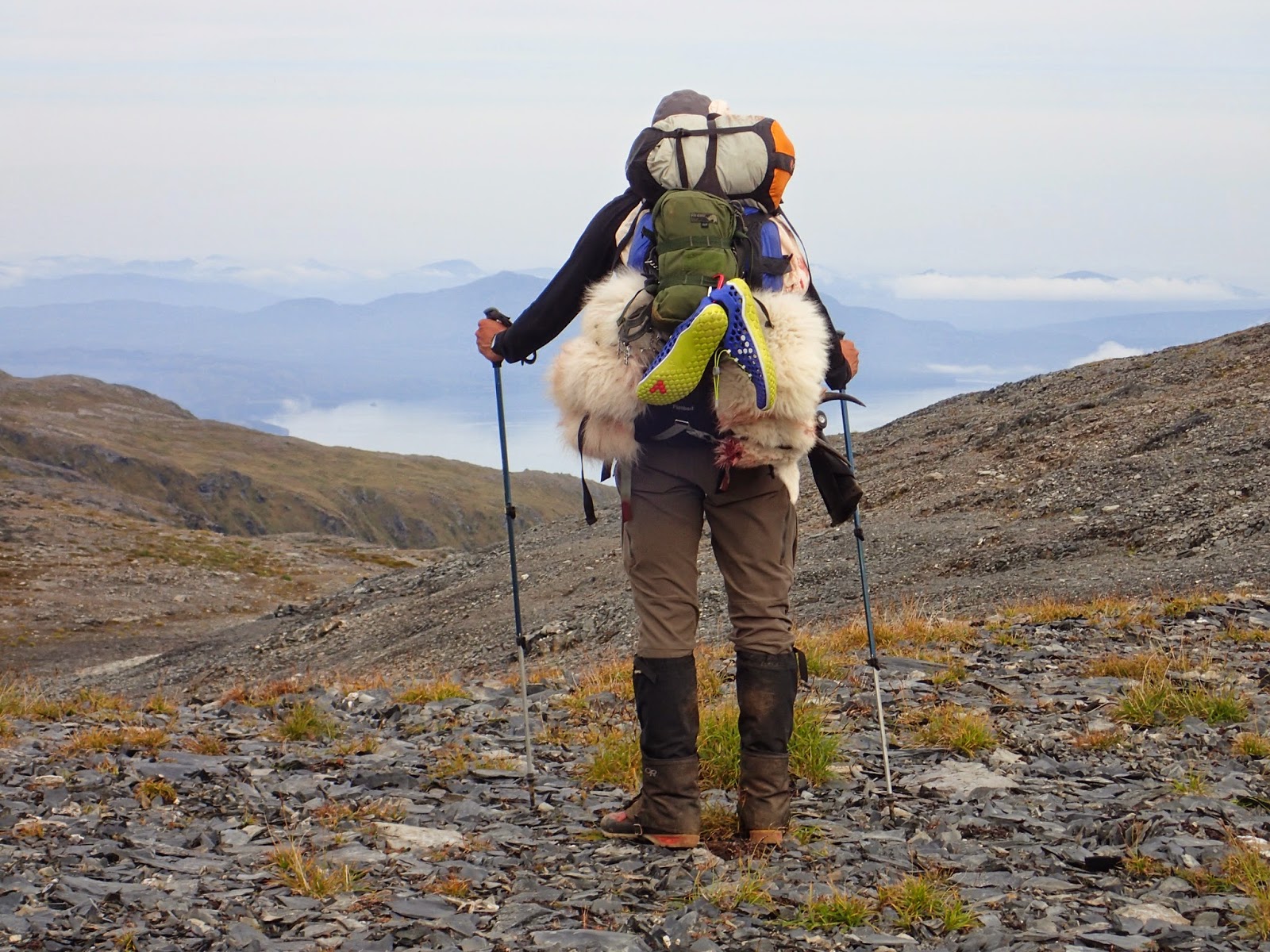 Near the end there it got pretty ugly.  As usual I have already sort of blocked it from memory, but I vaguely remember a period of constant pain.  I think the worst parts were the steep downhill, and then the unending river plain to the sea. At one point I was struggling to get up after a short rest and my pepper spray fired off a burst that soaked my thighs in burning hot pepper sauce.  By the time we got to the river flats my thighs were on FIRE.  It sort of took my mind off of what was happening with my glutes, waist and shoulders.  And then it started to rain.

But we got there and the plane picked us up on time.  We beat the storm back to Kodiak, and got to cut up our goat meat in town the next day while it stormed outside.  There is some primo goat meat in the freezer and later this fall we'll be making up a batch our favorite Italian mountain goat sausage.  All and all a successful hunt - as good as it gets for a goat hunt.  Patrick
Posted by Zoya, Patrick, Nora and Stuart at 7:05 PM