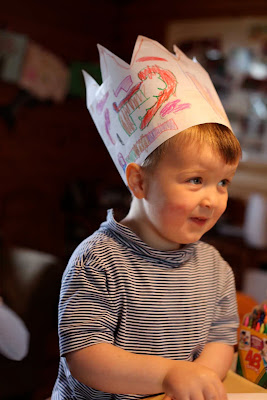 It has never really occured to me to call Stuey shy. At home he is not shy at all--but lately at dance class and at preschool I see the shy side of him come out.

It was first brought to my attention when his preschool teacher somehow found our blog. She said she liked seeing Stuey quotes, as he is so quiet in preschool that she enjoyed seeing what he said at home. I thought, "wow" he must really not be talking much at preschool!!

At dance class during Cinderella rehearsals I have once again seen Stuey's little shy side. He does this thing where he puts his head forward and his hands at his side and takes really small steps if he is being asked to do something. At some points the dance helpers (high schoolers) have to actually lift or carry him. Once the music starts and his dance starts going, he is good to go. There is something about the waiting in the groups of kids and older girls that makes him shy. Maybe its somewhat overwhelming...everyone waiting for him to do his little bumble bee moves--to be shuffled from one high school helper to another. I notice a lot of the girls say "Oh hi Stuey!!!" and he looks down at the ground and gets very shy.
Zoya
Posted by Zoya, Patrick, Nora and Stuart at 8:51 PM