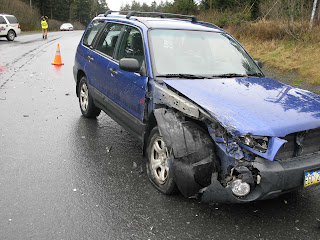 Today my subaru was involved in a very serious accident and it could very well be the end of the life for my 8 year purple-blue car. Today my friend was driving it and she was struck by a very new driver who was attempting a U-ey in the middle of the road. He only had his license for 2 weeks and after the accident, his friend (who was in the car with him) even said, "Man-he is a bad driver." Thank heavens neither driver was badly injured.

I was pretty shocked to see my Subi so tattered when I arrived to the accident scene. The trooper said it will most likely fit into the "totaled" category, and it now sits in the back yard of the auto repair place. This afternoon as it poured down rain, the kids and I went to look at it. I thought it would help them make sense of it all--to see the Subaru in such a state of despair. Nora's reaction was quite strong--she broke into tears and was so sad. She cried almost the whole way home. Stuey was in the back saying, "stop crying, nora". He didn't seem affected by it at all.

This afternoon we've been making up lyrics for a "bye bye subaru" song to the tempo of the Scooby Doo song.

Nora made up other song lyrics which included...."I will never forget you in my heart. I'll keep you safe and warm in my heart..."

One funny kid quote moment--this afternoon I had to go to the troopers to get insurance information for the person who hit the car. The kids were asking why did I have to go to the police? I said to get information so we could hopefully get money for the car. Then this evening we were driving to a party, and I was going a bit over the speed limit. I said outloud, "Oh, I should slow down so I don't get stopped by the police." And then Stuey replied, "Yeah. If you go to the police, you get money.." I got a kick out of that.
Posted by Zoya, Patrick, Nora and Stuart at 7:26 PM