Yesterday I traveled with Matt and Larry to Three Saints Bay.  Three Saints Bay is the site of the first Russian Settlement on Kodiak Island, and the trip represented my first archaeological survey of the season!  Our job was to check on the condition of the local archaeological sites for the landowner.  I did not find any new sites but I was able to determine that all of the sites are in good condition - no animal damage or erosion.

It isn't often that I get to visit a site that figures so prominently in the history of Alaska.  I remember reading about Three Saints Bay in a James Michener novel titled Alaska.  It was a terrible book and I stopped reading it soon after the Three Saints Bay scene.  I recall that in the scene an Alutiiq girl escapes the Russians and runs away to hide in the spruce forest.  Clearly James Michener got his scenery a tad wrong - the nearest spruce tree is miles and miles away to the north.  Ironically, I gather he did visit Three Saints Bay while researching the book.  A local helicopter pilot told me he once flew Michener to the site.  Maybe he just used a little artistic license.

Anyway, what's amazing about the site is the small size of the settlement footprint.  It was a tiny place.  The engraving below makes it seem like a far bigger and happening settlement than it was in actually.  It's kind of hard to believe something smaller than most remote setnetting operations was the capital of Russian Alaska.  But they did not stay long. The Russians moved their Kodiak headquarters to St Paul Harbor where the modern City of Kodiak is located in 1790 or so, and the Three Saints Bay settlement was largely abandoned by 1820.

A beautiful place to visit.  Patrick 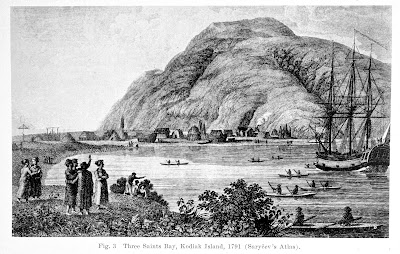 Posted by Zoya, Patrick, Nora and Stuart at 8:15 PM