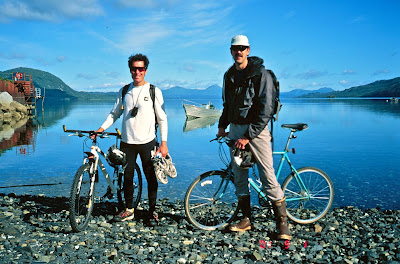 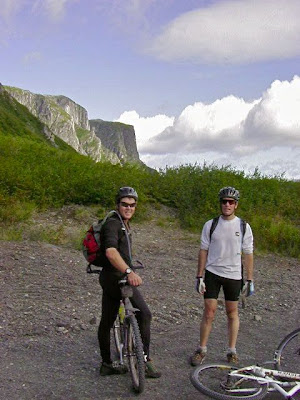 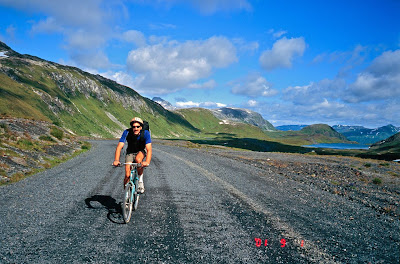 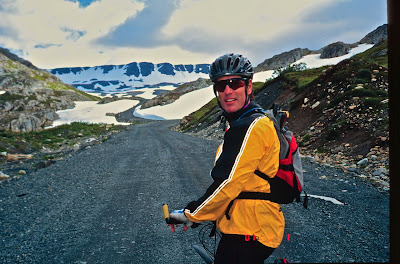 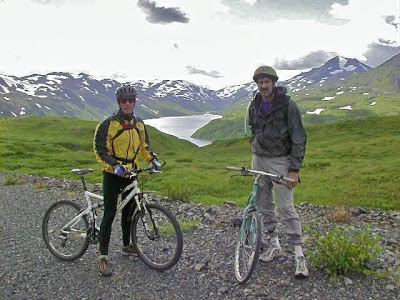 A blast from the past - from the early days of digital cameras when I still used slide film. It was Labor Day weekend 2001, and a bunch of my friends took a floatplane across the Shelikof to climb Mount Douglas in Katmai National Park. I had a wedding to attend and could not go with them - hence I was feeling pangs of jealousy. I needed a cool trip to do locally - so that I could both assuage my jealousy and attend the wedding. Have my cake and eat it too.

So it was perfect when Paul Z invited John M and I to go on a boat ride to the head of Kizhuyak Bay and then bike to Terror Lake on the dam maintenance road. The dam was built back in the 1980's and supplies the City of Kodiak with power. The road winds 10 miles or so and climbs almost 2500 feet to Terror Lake.

2500 feet is A LOT of climbing, and we felt like we were in the Tour de France climbing the L'Alpe d'Huez. Lots of Lance Armstrong and Marcos Pantani jokes. I tried to do the climb in a low gear and not stop (very difficult without a regimen of HGH or EPO), and it was brutal. We climbed up on switchbacks by huge granite cliffs, and suddenly we topped out in the alpine. The rest of the bike ride was a jaunt in 'Sound of Music' land. Snow and wild flowers and green, green grass with a road winding down the middle. It felt very weird to be riding a mountain bike on Kodiak in such glorious scenery.

On the way home the descent back to the boat was much more terrifying than the climb up. I was convinced my brakes would burn out before I reached the bottom and that I would be left relying on 'Fred Flintstone' type brakes. All and all a great trip and I did not miss the wedding either.

Note that some of the photos are very poor quality - that's because Paul Z took them with a very early digital camera. Back then I was amazed by their quality, and it is funny realize that at one time a 1 mega pixel camera was state of the art! The other pictures are slides that I scanned. Patrick
Posted by Zoya, Patrick, Nora and Stuart at 8:21 AM