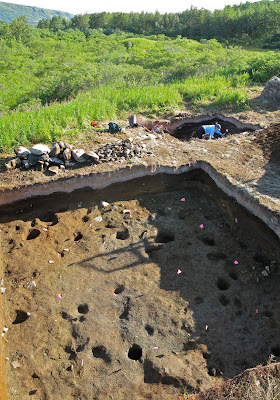 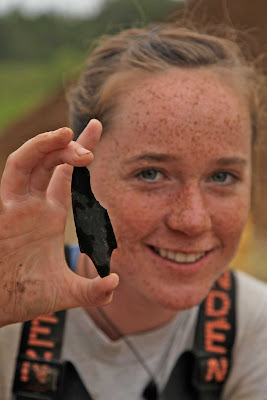 The excavation is nearing completion and we have already bottomed out on our main excavation block. Now is when we draw the profiles showing the different layers in the walls of the excavation. This is when we figure out the site's stratigraphy. Stratigraphy tells us what happened at the site - how each layer of soil is related to the others. Understanding the stratigraphy is probably the most important part of the site's story. Each layer is related to a different chapter of the site's history, and figuring out the stratigraphy is putting all the chapters in the correct order. It's the Table of Contents so to speak.

So here are the chapters as I understand them now. If you look at the 2 profile pictures the top white layer is all volcanic ash dumped on the site during the 1912 Mount Katmai eruption (capped by everything that has happened since 1912 including a 1964 tsunami deposit). Below that is a dark layer with a thin lens of grey silt on top. We called this layer Level 1 and it represents the soil surface for the last 3500 years prior to the 1912 eruption. The grey silt is from all the tsunamis that washed mud up the valley and onto the site. We have noticed in Womens Bay that all the landforms up to 25 feet above sea level have tsunami deposits on them.

Level 1 is also associated with the last occupation of the site 3000 or so years ago. The site was still right on the water but it was probably receding away pretty quickly. It was not a very intense occupation and we found just a few smoke pits and a very few tools associated with it.

The next layer down (Level 2) is a weathered volcanic ash deposited on top of the site around 3800 years ago. We know this because at other sites we have dated stuff both above and below this distinctive ash layer and the stuff below it consistently dates to around 4000 years ago while the stuff on top is around 3500 years old or younger. The layer is a bright orangish brown color and very soft. It is a pretty thick layer and appears to have been 'trampled' by people living on the site after it fell.

At the Amak Site, when we excavated through this soft ash we often uncovered a thin gray silty layer on top of another layer of mixed up ashes/pebbles/till etc. After close examination I believe the gray deposit represents another tsunami deposit from circa 4000 years ago or shortly before the site was buried by the subsequent ash fall. You can see the gray tsunami deposit in the middle of the profile in the second picture down in this post. If you look closely you can see that it is draped over the walls and roof of a structure caught in profile. Perhaps people were living at the site when they were forced to evacuate by the tsunami?

In any case, the mixed up layer capped by the 4000 year-old tsunami deposit represents the most intense occupation of the site. We termed this layer Level 2A, and it is all mixed up because the people living at the site in the Late Ocean Bay era 4000 to 5000 years ago, in addition to hunting a lot of seals, moved A LOT of dirt and sod about the site. We still do not understand exactly why because the structures from this level seem to lack the formal built up walls you'd expect if they were using the sods and dirt to build houses. Most of the artifacts we found came from this layer, and most of the artifacts were bayonets or bayonet fragments like the one Christy is holding up in the third photo.

During the Late Ocean Bay era the people at the site often removed all of the soil and sods down to the underlying glacial till left behind by glaciers over 10,000 years ago. The glacial till marked the bottom of the site and is pictured in the top photo - all pocked with old post holes and the holes left behind when rocks set into the till were removed. But in places where the Late Ocean Bay era peoples did not remove all of the soil we did find older soils and even evidence for a far older occupation of the site. We termed these layers Levels 3 and 4.

If you look closely at the right side of the bottom profile picture you can see these layers. They contain bright orange volcanic ashes and are quite distinctive. This particular part of the site was also disturbed by ground squirrel burrowing in the distant past. If you look really closely at the profile you will see a thin black line between 2 thin white ash lenses. The thin black lens is charcoal stained soil and represents the earliest occupation of the site over 7000 years ago. We know this because elsewhere I have dated the upper volcanic ash to around 7100 years old and the lower one is even older - the black lens is sandwiched between the two and hence dates to the time period between the 2 volcanic eruptions.

We found very few artifacts associated with this layer - just a few blades/microblades and a distinctive chipped stone point - and since the layer is so thin and ephemeral it appears that this site occupation was not very intense at all. Since later occupations disturbed the site so much we found very little of this layer and, at this point, we know very little about what happened at the site during this occupation. Hopefully, we'll uncover more of this layer next year and learn a bit more.

But for this year we are done digging - it's time to finish backfilling! Patrick
Posted by Zoya, Patrick, Nora and Stuart at 6:22 AM