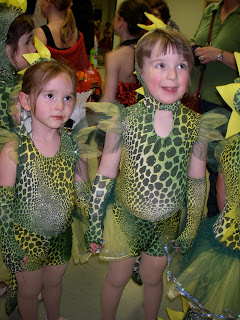 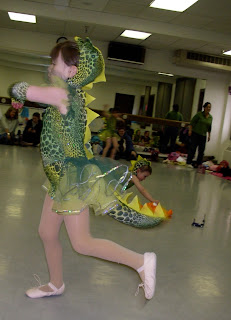 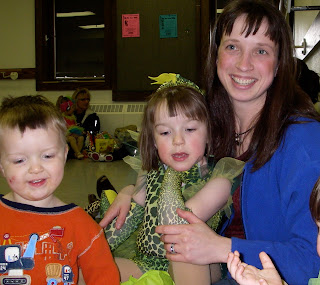 Nora's dance recital was two nights ago and it went so well. Mary jane was my date and Stuey stayed home with a sitter. I intended to bring him, but by 4:30 he was so tired, that I knew it wouldn't be possible to enjoy the 3 hour show, so I called in the reserves.
A good choice it was.
The show was absolutely fabulous. It was so well choreographed, with wonderful costumes, dancing and enthusiasm. The auditorium was PACKED and crowd was lively. It was so exciting to have a little dancer up on the stage. I didn't expect to get so giddy and excited. It was Nora's first real performance. And she was part of a pack of really cute baby crocodiles.

I was amazed by how much make-up was put on the little ones (yes-3 and 4 year olds) for their performances. Several of them had more make-up caked on them than I've ever had on my face at one time. I was somewhat astounded. Yes-I can understand the older kids needing make-up, but not the younger ones. At one rehearsal, I witnessed a mom spend at least 20 minutes applying layers of make-up to her four year old. Call me old fashioned, but I think its too much at such a young age. Young kids DON"T need make-up. THe director never said anything about make-up for the young ones, either. Nora will have plenty of years to be "older" and wear make-up, so I'm going to cherish these years she won't be wearing it. Fortunately for me, Nora didn't ask at all to put make-up on, which made me happy.

At 10:30PM by the time the show and finale were over, Nora was exhausted. So exhausted she couldn't think or speak. Someone had given her a single rose (it ended up being our babysitter who gave it to her, but I didn't know this). On the car ride home, I asked her who gave it to her, she said, "I don't know mamma. Maybe God. I think God gave it to me."
"Really?" I replied. "Maybe god did give it to you." She made other comments that were really out there--Nora was so tired and spaced out.

The night couldn't have gone better. Nora said she wants to do dance next year, which would be fun. She learned so much from dance this past year and has enjoyed the classes.

Zoya
Posted by Zoya, Patrick, Nora and Stuart at 9:23 PM