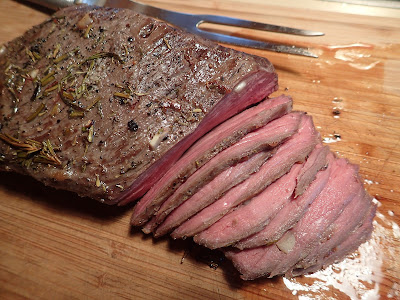 Lately a lot of my friends have been experimenting with the 'sous-vide' method of cooking meat.  Basically it involves vacuum sealing a roast and cooking it in carefully regulated, low temperature water baths.  You set the water temperature to 130 degrees, or whatever, and that is the temperature the roast soaking in the water eventually achieves. No over-cooking, no loss of moisture, just perfectly cooked meat - pink all the way through without constant monitoring of the meat temperature.  The long cooking times at low temperature also break up muscle fibers and make the resulting roast more tender.  However, there is the downside that if done too long (like over 12 hours) the roast can end up 'mushy' or 'bubble-gummy' (more on this later).

I've always been an advocate of cooking roasts at relatively low heat (click here to see my old roast recipe).  I've always believed that cooking temperatures below boiling at 212 degrees help meat retain moisture.  And I must admit the 'sous-vide' technique caught my interest - especially after a friend cooked up a particularly memorable Thanksgiving elk roast using this method. However, the technique seemed a little gear intensive what with vacuum sealers, pressure cookers full of water, and 'on-off' temperature switches etc.  Why couldn't I just adapt my usual oven-roasting methods to achieve the same results?

So with my roasts I went longer and cooler in the oven.  I set the temperature to the lowest setting (170 degrees in my oven) and then TURNED the oven OFF.  And turned it on for a bit later - on and off but mostly off.  I did use a meat thermometer in the roast and monitored it while the temperature slowly rose.  I pulled it out at 128 degrees and then flash fried it in a hot frying pan to brown the outside.  The results were stupendous - moist, pink and tender meat without the 'gummyness' or excessive clutter of sous vide.  The meat was moist and perfectly cooked, and better yet it still retained texture.

1 nice deer, elk, reindeer, or mountain goat roast - I prefer the 'flat roasts' from the back quarter
1 onion
1 cup chopped celery
1 Tbs of beef broth extract
3 or 4 cloves of garlic
1 sprig of rosemary and/or thyme
Ground Pepper
Lots and Lots of Kosher salt
Black pepper
2 handfulls of flour (and maybe some seasoned bread crumbs)
1/4 cup of beef lard (best) or some sort of oil

1) Thaw the roast out slowly in the fridge and then on the morning prior to cooking up the roast take it out and bring to room temperature on the kitchen counter. While doing this cover it in kosher salt to achieve a 'table top' brine.

2) For a 2 pound roast I start the cooking process 3 hours or so before eating.  I like my meat with gravy so the first step is to cut up an onion in the cooking pan mixed with the oil and/or lard.  I then brown the onions at 350 degrees for a 1/2 hours or so.

3) I also create a beef broth for the gravy.  I use 1 heaping tbs of beef extract in a pot of water and add a cup  or so of chopped parsley.  Then I let it simmer away adding a little bit of water to the pot occasionally.

4)  While the onions brown in the oven I cut up the garlic cloves and push garlic wedges down into the roast.  To do this I cut each clove into 2 or 3 pieces along the the long axis and then put each one into a hole I poke into the roast.  When I am done I sprinkle thyme, rosemary, ground pepper and a little dribble of oil onto the outside of the roast.

5) I stick a meat thermometer into the roast so that the tip is in the exact middle.

6) I remove the roasting pan and browned onions from the oven, turn off the oven, place the roast on a rack on top of the onions and return the pan to the oven.  I then monitor the meat thermometer temperature.  Basically I leave the oven off, but occasionally I turn it back on at its lowest setting for a short while at a time.  But the cool thing is that if the oven is off there is no real need for close monitoring.  I have even driven out to the airport to pick up guests at this stage of the game.  It is long and slow after all.

6a) If the roast seems to be cooking too quickly keep the oven off and maybe briefly open the oven door.  This method does require more monitoring than 'real' sous vide - so a meat thermometer that you can read outside the oven is a must have.  There is nothing wrong with having the meat temperature plateau and stay at say 125 degrees for a long time.  This is exactly what one does with 'real' sous vide.


7) When the meat gets up into the 120s (degrees Fahrenheit) it is time to heat up a cast iron frying pan.  I add a little oil just before I put the roast (once it hits 128 degrees) in to brown it.  I cook it maybe a minute 30 seconds on each side but at high heat to achieve a nice sear.

8) I put the browned roast aside on a cutting board to rest and create the gravy in the roasting pan.  To start I add 2 handfuls of flour (and sometimes some seasoned bread crumbs) to the browned onion and oil mix in the bottom of the roasting pan, and stir.

9) Once the flour has browned I slowly add the celery flavored broth to the pan.  I stir it all up and add more broth a little at a time until the gravy has the right consistency.  Then I pour it into a gravy boat.

10) Cut the roast thinly across the grain and serve with gravy!

This technique is not sous vide - it is better than sous vide!

Posted by Zoya, Patrick, Nora and Stuart at 6:05 PM