Yesterday I got back from a 2 and a 1/2 week sojourn on Afognak Island.  For the first part Mike S and I conducted an archaeological survey by kayak.  It was supposed to take 10 days but some big storms delayed our progress and it ended up taking 13 days.  The second part of the trip was our annual boat-based elk hunt.  That part was supposed to take 8 days but a storm delayed the boat's arrival (by 3 whole days!), and then we got our 2 elk within 24 hours of arrival.  So the hunt ended up taking just 3 days.

By the time the rest of the elk hunters arrived by boat Mike and I were getting a little loopy.  The only person we had interacted with in 2 weeks was the floatplane pilot and each other.  We had literally seen no one - not even any planes or boats.  We heard the jet once, saw a logging truck, and even a logger cutting down a tree - but that's it.  For the last few days we had been stuck inside the teepee in hibernation mode while the storms raged.  I think our social skills and mental condition were a little scary to the others when they picked us up.

Our archaeological survey was very successful.  We found 10 new archaeological sites (mostly villages) and examined another 9 previously known sites.  Basically we doubled the amount of known sites for the area we examined.  Patrick 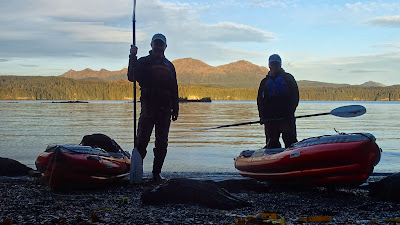